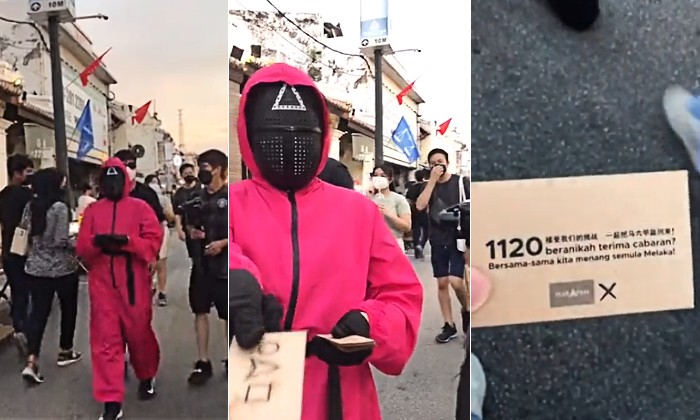 As the Melaka State Election draws near, and with a physical campaigning ban in place because of the pandemic, it appears that Malaysia’s political proponents are playing a perilous game to instil voters’ support.

Malaysians made a mockery of a viral video that showed a masked individual dressed up in a pink jumpsuit as a character from the hit Korean Netflix series, ‘Squid Game’ who was distributing cards to members of the public.

“Are you ready to accept the challenge? Together we will win back Melaka,” was apparently written on the back of the card which supposedly promoted people to vote for the Pakatan Harapan (PH) coalition at the polls.

The guerilla campaign tactics may be amusing to some, but to most netizens seen commenting online, let’s just say that the plan may have also had unintended consequences.

Netizens collectively called out the irony of the campaign and said that the people behind it simply didn’t get the premise of the popular show.

“Creative but horrible meaning at the same time,” laughed one commenter.

“Tell us you don’t understand the main theme of the series without actually telling us that,” wrote another.

“I’m crying, they really mimicked a show where rich people pawned poor people as entertainment into some election campaign,” said another.

The internet also seemed to laugh off the campaign and some even said it was making them cringe.

Watching this video & suddenly something crossed in my mind was did Pakatan Harapan not know that this Squid Game system is so cruel it caused so many people need to survive for stay alive & be killed after accepted the challenge? 🤭 Is this a hint for Malaysians if they win ? pic.twitter.com/Lang9JZ3np

Read More: What Squid Game Taught Me That’s Not About Winning A Mass Murder Game Show

In summary, the show is about the lives of poor people who received an invitation to play a series of children’s games for a chance to win money. The game is orchestrated by a group of evil billionaires who bet on the game for personal gain.

The catch is that the players in the game are basically held hostage throughout the entire series where the consolation for losing is literally game over and they would die or be killed.

The show’s theme is basically a commentary of the financial struggles, economic and class disparity as well as corruption that exists in South Korea and all over the globe.

According to Malaysiakini, several individuals in pink jumpsuits were there in Melaka to hand out even more Squid Game themed cards to the public near the Democratic Actions Party (DAP) building in Kota Laksmana.

A digital QR code was printed on the back of the card which reportedly linked to content posted by a group called Frontman Melaka – taking inspiration from another character sharing a similar name in the show.

The series of videos told its viewers to pick their candidates wisely and to reject frogs, tractors and liars.