The 11 mini landmarks at Pulau Bidong might cause more harm than good, environmentalist group says. 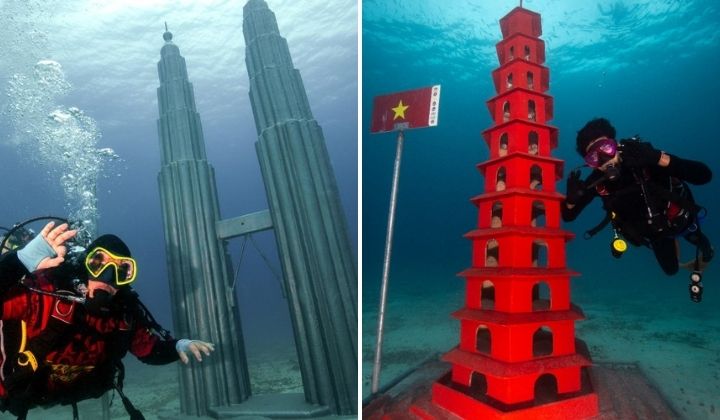 In a bid to boost tourism in Terengganu, the Tourism, Arts and Culture Ministry has spent RM300,000 from the Asean Cultural Fund to place replicas of 11 Asean landmarks underwater at Pulau Bidong, a popular diving spot.

The first Asean Underwater Mini Landmark (AUMiL) include replicas of:

During the launch of AUMiL, Tourism, Arts and Culture Minister Nancy Shukri said the project is being run in cooperation with  Universiti Malaysia Terengganu and the National Heritage Department under the ministry.

While it sounds like a wonderful project to attract divers, environmental activists are wary and voiced their worries about the whole idea.

Ecotourism and Conservation Society Malaysia (Ecomy) CEO Andrew Sebastian told FMT that the project went against the purpose of marine tourism and the money could have been better spent to protect the ecosystem there.

After all, Malaysia is part of the coral triangle and the country has one of the most sought after diving spots in the world.

According to WWF, the coral triangle located in the western Pacific Ocean includes the waters of Indonesia, Malaysia, the Philippines, Papua New Guinea, Timor Leste and Solomon Islands.

Sebastian explained that these objects on the seabed would often be destroyed by undercurrents during a strong monsoon which in turn may cause the objects to topple into coral reefs.

Another worrisome point brought up was whether the landmark replicas were made out of safe, non-toxic materials for marine life.

In a report by TwentyTwo13, an official from the Ministry assured that the materials used to construct the mini landmarks are safe and eco-friendly.

“The construction was guided by experts from Universiti Malaysia Terengganu, which has a marine research station on the island,” said the official.

In Ecomy’s Facebook post, they wrote that it was disappointing to see that the ministry has been ill-advised.

“Divers will not come to see artificial replicas in our marine environment,” Ecomy wrote in the caption.

Sebastian also said the money spent on these replicas could have been used to place more artificial reefs and other fish aggregating devices to help with conservation efforts in Pulau Bidong.