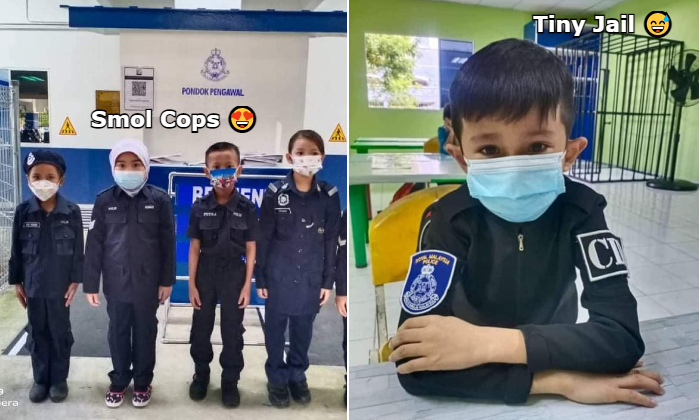 A group of 80 pre-school students from the Tabika Kemas Al-Ghazali in Kota Kinabalu, Sabah were found guilty of being too freakin‘ adorable when they were spotted playing dress up as miniature police officers in class.

Images shared on the Royal Malaysian Police (PDRM) social media channels provided clear evidence of the charming children and how they managed to trigger multiple cases of ‘cuteness aggression’ among netizens online.

“So cute 😍 Hope the kids enjoy learning and succeed in the future, Insyallah!” noted one commenter.

“Awesome! This idea is so creative.” said the another.

“The teacher and staff efforts are beyond the ordinary. Must be tiring to set the whole place up. Good work!” encouraged one social media user.

“Don’t forget to include an anti-corruption module,” joked another commenter.

According to one witness, Mastina Masir, who also happens to be one of four teachers at the school, the entire facility had been redecorated, DIY style by staff to look and feel as though it was an actual police station in order to inspire the children to dive into the field of policing at an early age.

The teacher said that aside from the school’s normal education syllabus, the tiny boys and girls in blue were also exposed to a range of policing activities which includes the forensic department, the traffic department, the commercial crimes department and the narcotics squad.

Among the school facilities even includes a jail cell, which we hope isn’t used on some of the more naughty children.

The policing lessons taught at the school were made with help and references from the Sabah Contingent Police HQ and was officiated last August by Sabah Police Commissioner Datuk Hazani Ghazali.