Not the first, but hopefully the last time this will happen in KLCC. 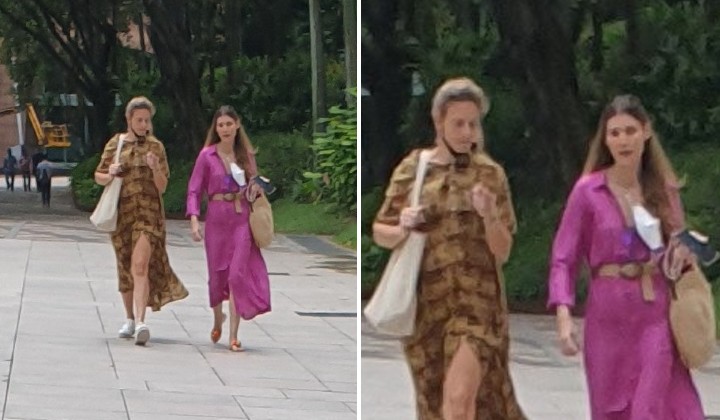 A pair of alleged anti-maskers were spotted leisurely strolling through KLCC Park without masks on, according to Twitter user Dieba Ojay.

In an angry Tweet, she blasted the pair of ‘Karens’ for not following the SOPs.

What happened to the law? Isn’t it right for me to be angry?

Dieba had snapped the picture during her lunch break around 12.30pm and noted to TRP that there were no enforcement officers to be seen at that time.

She revealed that she was particularly angry at the double-standards shown by KLCC enforcement officers.

Recounting her own recent experience, Dieba also told TRP of how KLCC authorities were quick to reprimand her for taking off her mask to take a selfie with her child at the popular visitor’s spot last month, even for a short while.

However, these anti-masker ‘minah sallehs‘ could walk around freely without being stopped.

So I feel mad as the rules did not apply to foreigners.

Fines are only slap on the wrist for these expats, thats why they willing to flaunt and disrespect our law.

Naturally, local Malaysians were shocked at the double standards, especially since it seems like these ang moh anti-masker ‘Karens’ continuously breach SOP without remorse.

Many netizens, including Dieba Ojay herself, continuously tried to catch the attention of Health Minister Khairy Jamaluddin, the Health Ministry (KKM) and the police (PDRM) by tagging them on the post, hoping that authorities would do something about the anti-maskers.

I hope our Gov can be more firm/strict towards foreigners who did not follow our rules. It is unfair for us the local as we did follow what KKM tell us to do. We even wear mask whenever we go. We need to make sure these foreigners respect our rules and please take action seriously on this matter.