The US CDC has updated their policies and recommendations to encourage and require people to wear face masks. 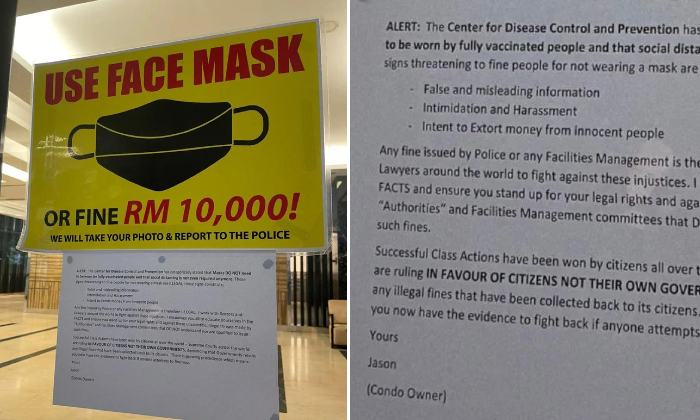 Netizens had themselves a quick but concerning chuckle over a note that was supposedly typed out and left by a condominium homeowner in Kuala Lumpur who was trying to make a case against the mandatory face mask rule dictated in the Government’s pandemic SOP.

The note, written by a man named Jason, was left plastered underneath a warning sign at the condo’s entrance that reminds people to keep their face masks on or pay the price – which according to the bold-type memo made by the condo’s management means having one’s picture taken, reported to the police and paying a fine of up to RM10,000.

Based on the note, it appears that Jason opposed the mandatory masks rule and stated that it was illegal for the condo’s management or even the police for that matter, to issue fines to people for not masking up.

Jason calls it an injustice for the authorities, who he says, are not qualified to issue or threaten people with fines and said that law enforcers and the building’s management were providing false and misleading information besides intimidating, harassing and extorting the residents there.

To make his case, Jason included some un-updated policies that were previously recommended by the United States (US) Centers for Disease Control and Prevention (CDC).

Jason also claims that people from around the world had begun taking action and are winning against the authorities who require or punish people for not masking up and is implying that Malaysians do the same to stand up for their rights.

Supreme Courts across the world are ruling IN FAVOR OF CITIZENS NOT THEIR OWN GOVERNMENTS, demanding that Governments return any illegal fines that have been collected back to its citizens. There is growing precedence which means you now have evidence to fight back if anyone attempts to fine you.

wrote Jason the Condo Owner in his note.

Well, Jason, we’re here to tell you that you’re wrong.

See Jason, according to the latest CDC public health guidelines, members of the public are both encouraged and even required in some places, to wear face masks either indoors or outdoors regardless of whether they have been vaccinated or not.

The health agency’s latest set of guidelines state that;

It’s also necessary to note that in the US, mask requirements might vary from place to place so the public is required to make sure that they follow the rules and regulations set where they are.

In addition to the mask rule, people in the US are also advised to maintain physical distancing rules, even when you’re at home.

People are also encouraged to take the Covid-19 vaccine as quickly as possible.

Another thing that people were more than keen to point out to Jason, is that he is currently living in Malaysia and thus must abide by Malaysian rules, not the US.

Even our Health Minister Khairy Jamaluddin Abu Bakar was famously quoted as saying “When in Rome do as the Romans do. When in Malaysia, please mask up. Regardless of the rules elsewhere.” when last confronted with cases of denizens refusing to follow Covid SOPs

See Jason, unlike in the US, here in Malaysia it is first and foremost mandatory for each and every denizen to be fully vaccinated against Covid-19, except if they have medical conditions that prevent them from taking the jabs.

Unvaccinated people are banned from attending or entering public spaces, including eateries and most stores.

Travellers and tourists to Malaysia are also required to be fully vaccinated in order to be allowed entry.

Members of the public are required to wear face masks and maintain physical distancing at all times when in public or in the company of other people outside their household or immediate social bubble, both indoors and outdoors.

People are only allowed to take off their masks when they are alone inside or outside (like in their own cars for instance), when they are eating in public at a restaurant that allows dine-ins, or when they are taking part in outdoor activities and exercise separated from other people.

Failing to follow these rules means that a person is liable to fines and even jail time as stipulated in the Prevention and Control of Infectious Diseases Act 1988 (Act 242).