The reporter was apparently asking the Ministers comments about gambling policies. 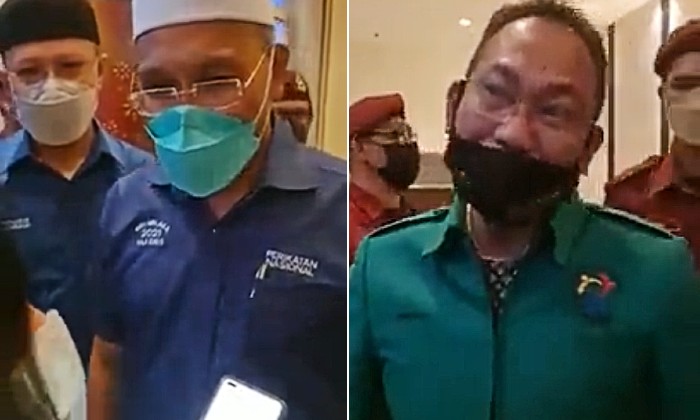 “Such bullies,” cried netizens in complaint of a viral video that captured Federal Government Ministers and a Member of Parliament (MP) allegedly being rude to journalists during an interview.

During the interview, Awang supposedly patronised the journalist for asking questions in English and said “You ask [the question] in Bahasa Malaysia la, we are Malaysian what? You are Malaysian speak Bahasa la.”

The Minister was quickly confronted by the reporter who said, “I am a Malaysian. Please don’t do that,” and asked the politician to be a little nicer.

In reply, Awang said “You must also ask proper questions, you know. You want me to respect you, you must respect us first. Can you speak in Bahasa? Please speak in Bahasa.”

Undeterred, Minderjeet continued on with her line of questioning directed to Idris, asking for his comments about PAS’s policy towards gambling.

Weirdly enough, Idris took to fire his own questions to the reporter asking, “Would you agree if your husband was a gambling addict. I ask you first. You must first answer my question,” before laughing it off and ending the interview.

Naturally, the video drew some criticism from Malaysians online who find the behaviour shown by the two Ministers to be unprofessional.

“Disgracefully rude. We are so stuck in a culture of demanding respect and not giving any in return,” wrote one commenter.

“Pulling out that ‘whataboutism’ because clearly, he can’t answer that question with a solid answer,” insinuated the other.

“Respect needs to be earned, and this is a bullying mentality. No elegance in action and speech. If you do not want to answer in English, just answer the question in Bahasa is okay enough.” said another commenter.

This is unacceptable. It's okay not to answer questions from a journalist, but attacking media personnel is the lowest form of democracy. You, as a policymaker are answerable to media (rakyat). Do better PAS! https://t.co/RWCl0hcYia

While some also pointed to the fact that Awang was not wearing his face mask properly during the short interview.

“How can someone who wears a mask like this be a Minister?” noted one observer.

In an article published by Harakahdaily, PAS Youth Information Chief Nadzir Helmi defended the seniors by saying that the reporter had apparently met her match during the interview.

The journalist seemed bewildered because her husband was used as an example, while this is the real fact that gambling has damaged many family institutions.

Nadzir later went on to describe PAS’s mission to “save” the public from the woes of gambling and that gambling has damaged many family institutions here in Malaysia.

Don’t be provoked by political interests that prey on [our] non-Muslim friends as if gambling is part of their life and culture. Take pity on our friends’ children, wives and husbands, by saving them from wallowing in the excrement that is gambling. This is PAS’s struggle for the people. Bring an end to polemics. We have much bigger tasks to complete in this world and hereafter.