It’s not uncommon to spot dolphins swimming in our waters. 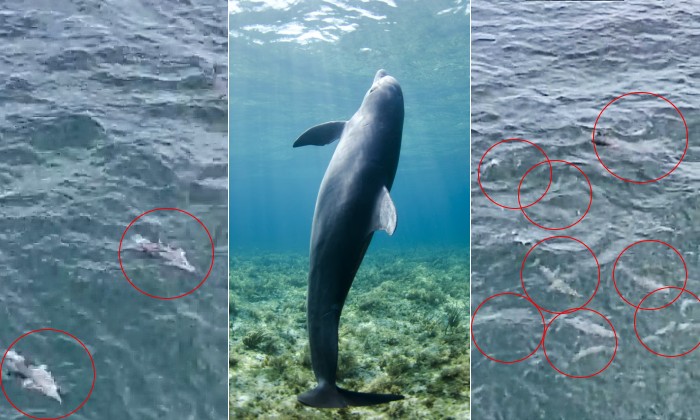 Credit: vamos32 via Twitter/NOAA via Unsplash

Malaysian animal lovers were ecstatic over the sight of a pod of 100 to 200 dolphins spotted swimming near our shores.

A viral video believed to have been captured on a ship sailing through the Straits of Melaka shows the impressive group of sea mammals darting beneath the waves – with some even surfacing and circling around almost porpoisefully near the vessel as it made its way across the ocean.

The 15-second clip did draw alarm some alarm from netizens who fear that the sight of such creatures swimming in large groups could be an omen for bad things to come.

This is because some old sailors tales believe that a huge storm may be brewing in deeper waters if dolphins come swimming close to shore.

Despite the turbulent superstition twirling around the net, people were still relatively mesmerised by the appearance of the elusive animals.

“This is a sign that the Melaka state election is nearing” joked one commenter.

Technically, it’s not that uncommon to see dolphins swimming in our waters.

According to the Selangor Fisheries Department in an article by Sinar Harian, the Melaka Straits which stretches from Perlis all the way to Johor is home to three species of dolphins: the Indo-Pacific Humpback Dolphin, Irrawaddy Dolphin and the Indo-Pacific Finless Porpoise.

But dolphin sightings in Malaysia are reportedly on the rise since the recent pandemic lockdowns.

In June, Melaka Agriculture, Agro-Based, Entrepreneur Development and Cooperative Committee chairman Norhizam Hassan Baktee told The Star that large numbers of dolphins and Giant Marine Shrimp were seen returning to Melaka shores for the first time in 40 years due to less pollution.

It is said that sea reclamation works in the state that started in 1974 had driven away most of the sea life away from the area. Old fishermen even tell stories that in the 60s’ and 70s’, you can even find large sea turtles the size of Volkswagen Beetles swimming near our shores.

So we also just found out about this, thanks to a local Twitter environmentalist freyr, who pointed us in the direction of the MareCet: Marine Mammal Conservation organisation, a non-profit that’s working on researching and protecting Malaysia’s marine mammals.

MareCet has a program that encourages the public to become citizen scientists and report on sightings of marine mammals such as dolphins, whales and dugongs in Malaysian waters.

If you by any chance come across any splendid sea creatures on your trips to the sea, you can simply fill out this form (HERE) to make note of the sightings.

Seen a dolphin/whale/dugong in Malaysia and don’t know who to report to? Well let us know! Here’s a link to our marine mammal sightings form:https://t.co/80t2Nhr8wY
Let’s work together to fill the knowledge gaps on marine mammals in Malaysia! #dolphinconservation #malaysia pic.twitter.com/i28poCFtP7