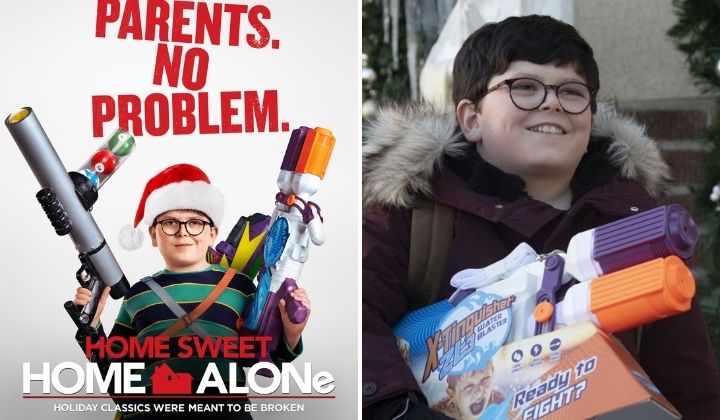 I love the first Home Alone movie starring Macaulay Culkin but I don’t remember much of the sequels to be honest.

So when I saw that there was a new one, I thought of giving it a try because I was also curious to see what new elements they are bringing into the sixth film of the franchise.

Immediately, we’re introduced to the McKenzie family. It’s a few days before Christmas and Jeff and Pam McKenzie are trying to sell their home without telling their two children.

They couldn’t afford to live there anymore since Jeff lost his job as a data migration manager.

One of the house viewers that turned up is Carol Mercer and her son, Max. During the house tour, Max discovers that Jeff owns a box of ‘ugly dolls’ which Jeff explains that these ugly dolls can fetch a high price if sold.

Once the Mercers left, Jeff came across an online bid for one of his ugly dolls. Knowing that the amount of money could save his home, he scrambled to find the doll only to realize that it was missing.

Jeff and Pam believed that Max stole the ‘ugly boy’ doll from them during the home visit. Jeff tried to talk to the extended Mercer family but didn’t manage to get a word in because the family were all rushing to the airport to fly to Tokyo, Japan.

During the whole commotion, Jeff overheard the security password of the house and the thought of breaking in just to steal back what’s his began to form in his mind.

After all, what’s the harm of entering an empty home right? Unfortunately for the McKenzies, Max was left behind by his family. Max retreated to the garage the night before because he had enough of his annoying and crazy family.

When Max misunderstood their plans to sell the ‘ugly boy in the house,’ he began setting up deadly traps around the house to defend himself.

How did the booby traps measure up?

Did the traps set by Max bring pain to his poor neighbours? Yes, it totally did.

The minute he found out the McKenzie’s plans, he got right to work fashioning traps around the large home and even used the cold weather to his advantage.

Without revealing too much, I definitely winced when Pam pulled out nerf darts with thumbtacks at the end from her face and chuckled a little when Jeff struggled to be a good thief.

However, I also wondered how the bullets managed to miss Pam’s eyes or any of the vital parts of the body.

Then I remembered it was a Disney film so there won’t be any Final Destination-type of goriness in the film.

Sadly, Macaulay Culkin did not reprise his role as Kevin McCallister or make any appearances in the film.

However, Devin Ratray, the actor who portrayed Kevin’s brother Buzz McCallister, returned as a clueless policeman.

To be honest, Buzz only appeared for a few minutes in the show and I didn’t remember who he was until I started googling.

The other side character I recognized immediately was Jeff and Pam McKenzie’s real estate agent played by Kenan Thompson.

Stream or skip it?

I loved the first Home Alone movie because I thought the traps were ingenious although deadly.

While Max’s ‘maze of death’ certainly made it harder for the McKenzies to steal back the doll, I can’t help but feel there was something missing there.

Maybe it’s because everything just seems cooler when I was a younger child.

At the end of it all, Home Sweet Home Alone is not a masterpiece for me personally but it still makes a good Christmas watch with the family.