The escalator has been out of order since 2016. 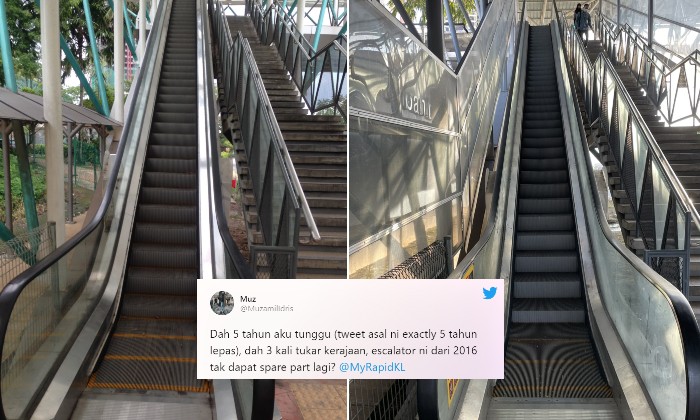 Netizens shared a rather depressing laugh when Muz retweeted the ‘anniversary’ of his personal enquiry to Rapid KL’s social media pages about the escalator that he said had been out of order for some time on 9 November 2016.

His complaint at the time did receive a reply from the official @AskRapidKL customer support page to which they said that “We apologise for the inconvenience. At this time we are waiting for spare parts to repair the said escalator.”

“I’ve been waiting for five years, we’ve changed governments three times, the escalator still hasn’t got its spare part since 2016?” asked Muz in his latest enquiry half a decade later.

This time, his question got an answer from the @MyRapidKL Twitter page which thanked him for informing them about the long-standing issue and said that they would get their staff to check on the matter.

The Twitter exchange of course gained massive attention from other social media users who were quick to criticize Rapid KL as well as point out the weaknesses of Malaysia’s public transportation services.

the epitome of public amenities in Malaysia https://t.co/zJ7OGTM1VJ

Some commuters who frequent the Sri Rampai LRT station also shared their own personal experience to confirm that the escalator there had been out of service for a very long time.

i entered uni in 2016, spent time a lot using the lrt station at sri rampai, the escalator operated only ONCE, and then never again, then i graduated 2019, now sambung degree pulak, and it’s still not operating! 😂😂😂 what a country

Others also took the opportunity to inform Rapid KL of other out of service escalators across the Klang Valley.

Not just Sri Rampai but I think the escalator at Maharajalela has also been out service since forever. Not sure if it’s already fixed now. It’s like @MyRapidKL just gave up on the monorail line. https://t.co/7A7XYRaO7Z

Rapid KL and its parent company Prasarana Malaysia has been a hot topic in the public conversation sphere as of late mainly due to headlines like these:

In May 2021, Pasir Salak Member of Parliament (MP) Datuk Seri Tajuddin Abdul Rahman was sacked from his post as Prasarana Malaysia chairman after the incident which saw two trains carrying some 200 passengers colliding on the LRT Kelana Jaya line where 81 people were injured including 47 who were seriously injured.