The two argued if it was okay or not for dogs to use human amenities. 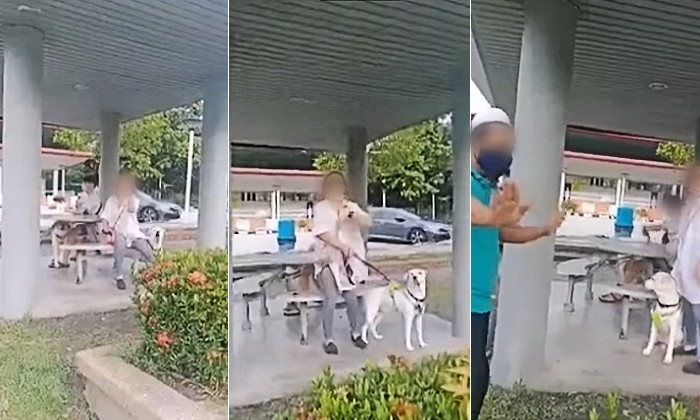 A tense argument between one ‘Pakcik’ and an ‘Auntie’ believed to have taken place at the Ayer Keroh R&R rest stop on the North-South Expressway (NSE) heading to Melaka triggered a fierce debate online.

So there’s this video that’s going around that captured a man reprimanding a woman for sitting at an outdoor ‘pondok’ with her two pet dogs.

At just over three minutes long, the clip had the duo exchanging heated insults at one another over whether or not the dogs were allowed to sit together with their owners at the pondok table.

“The dog isn’t bothering you,” yelled the lady, stating that she and her dog had every right to be there.

While the man behind the camera expressed his discomfort and dissatisfaction over the woman’s action and yelled back saying that “This is no place for dogs. People come here to eat and relax.”

The two continued to argue before another man stepped into the frame to try and resolve the situation.

Comments on social media saw netizens drawing a line on whether it was right or wrong to have pets and animals lounging around together with their owners in public places.

On one side of the argument, people feel that there was nothing wrong with pet animals like dogs to be sitting in the same spaces meant for humans and that it was bigoted to feel angry about it.

“This is so unreasonable. Dogs are living creatures too. It’s so tiring seeing this kind of thing happening in our country,” wrote one commenter.

“Don’t enforce your religious beliefs onto others,” commented one man in response to those who say dogs are considered as ‘najis’ or dirty by Muslims.

Many agreed that as long as owners were able to control and pick up after their pets (clean up their poo), it was perfectly okay for everyone to be in the company of canines.

While opinions on the opposing aisle argued that it was both unhygienic and insensitive for dog owners to have their pets using the same amenities frequently used by other people.

“How long have you’ve been in Malaysia? Still don’t know our cultural norms?” noted a commenter.

“Just follow the rules and keep the sensitivity of other races in mind then confirm no problem,” wrote another.

But since we ourselves haven’t been on a road trip in a while, we cannot confirm or deny this information.

Instead, TRP sent over some queries to PLUS Malaysia Berhad for more details on the matter. We’ll be sure to update the story when they get back to us.

In the meantime, let try and be civil with one another and not scream at each other in front of animals who don’t know better.