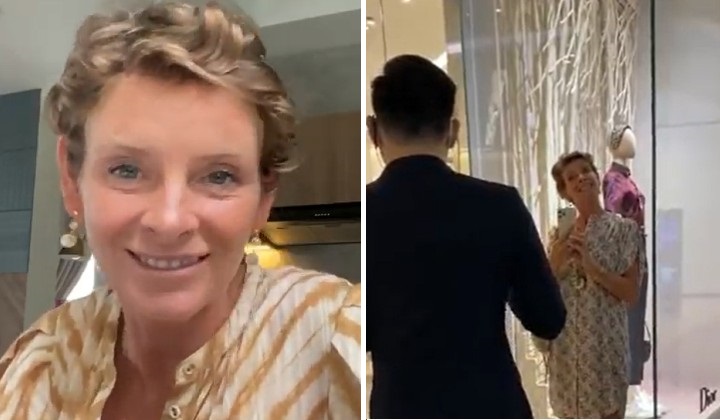 The Caucasian woman dubbed as KLCC Karen or Karen Dior, who caused quite the stir on social media for refusing to mask up in public, is back.

But this time, in a video where she addresses her right to exercise her freedom to choose.

From Manchester to Malaysia

In the video, it is revealed that ‘Karen’  is actually called “Kerry”, and she hails from Manchester in the United Kingdom.

She’s been in Malaysia for 20 years and came in “peace and love”.

While the beginning seems like a pretty straightforward introduction, the rest of the video starts going into a freedom narrative, among other things.

🚨Our patriots from Malaysia
harassed by the government(see pinned Tweet)
terrorised at the her home
newspapers demonising her
facebook bots hate speech
has a message for the Malaysia, for the world
and of course to Brandon
LETS GIVE HER A GREAT VOICE#freedom #LetsGoBrandon pic.twitter.com/KNXWckIdgC

Singing the song of ‘freedom’

Kerry continues in the video by saying her family and herself have a song, and it’s “freedom”.

Freedom to choose, what we eat, where we go, who we go with, and what we do to our bodies. Medically or otherwise. It is a choice. Your choice. My choice.

She then says that many countries are giving up their (mask) mandates and says there are links below where people can read and form their own opinion.

The video then sees the woman using Malay terminology like “rumah terbuka” and “makanan enak” to get Malaysians to imagine an open house every day for a united Malaysia.

She ends the video on a seemingly unrelated catchphrase,  “let’s go Brandon”, a political slogan used in America to insult their president, Joe Biden.

“Let’s go Brandon” is a minced oath for “F*ck Joe Biden” which was first heard at sporting events in early September 2021 in which a sports reporter incorrectly heard the rude chants.

The line has become a conservative code popular among Republicans there for something far more vulgar.