The company footed the medical bills and paid compensation to the bikers. 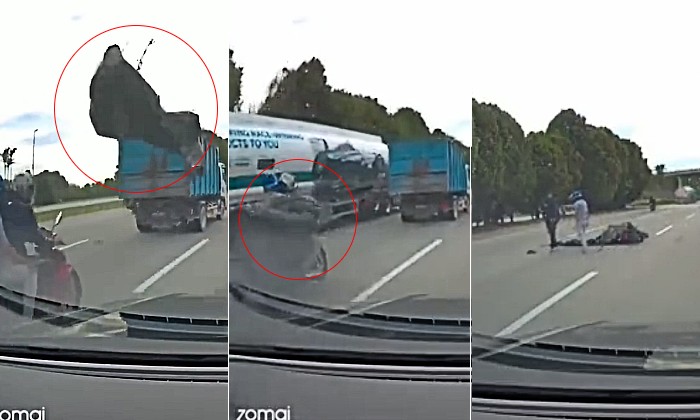 Motorists were warned to take extra caution on the roads when footage of a traffic incident caused when a large canvas tarp came flying off a lorry on the Damansara-Puchong Highway (LDP) heading to Putrajaya, went viral.

45-seconds of dashcam footage, dated 3 November, witnessed a motorcycle carrying two people avoiding what could’ve been a fatal crash when the lorry’s canvas coverings had become detached while the vehicles were travelling at speed.

The video saw the bike and its riders being smothered by the flying debris as they were cruising behind the blue lorry before losing control and crashing in the middle of the highway – nearly missing other vehicles travelling on the same route.

Luckily though, the two people on the bike seemed to be relatively okay following the crash.

The incident had, of course, triggered netizens to be wary of large vehicles.

This is why I hate driving next to a lorry https://t.co/Bp6iUp1bZO

Following the viral incident, the company that operated the ‘arm roll’ lorry in question came out to provide a statement.

KDEB Waste Management Sdn Bhd (KDEBWM), a wholly-owned subsidiary company of Menteri Besar Selangor Incorporated (MBI), expressed their regrets over the incident and said that the subcontractor and the crew employed to manage the lory will be taken to task accordingly.

They say that strict action would be taken against the subcontractor if it was determined that the latter had failed to comply with standard operating procedures (SOP).

They also mentioned that the subcontractor and lorry driver would be submitting an incident report on what happened and also a police report concerning the case at the Sepang District police station.

KDEBWM further noted the victims of the incident received medical treatment and compensation paid for by the company.