The incident was apparently triggered when the parents got angry that the resident guards didn’t babysit their kid. 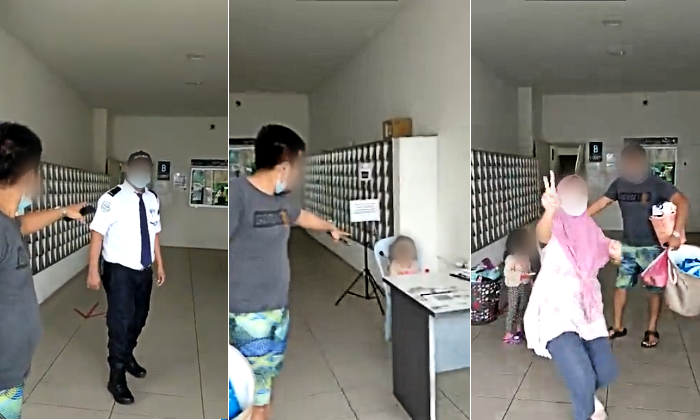 Netizens don’t quite know what to make of a recent viral incident that saw a couple having a heated encounter with security personnel at an apartment complex in Sentul, Kuala Lumpur over what’s described as a “nuisance incident”.

So according to a memo made by the management of Residensi SkyAwani on Facebook, a family of new tenants who were renting at the apartment building had allegedly harassed their security guards – having acted both physically and verbally aggressive in public.

The management said that the couple apparently had left their child at a security desk manned by one of their officers, supposedly to have him watch over the little girl while they were off doing other things nearby.

The post further explains that, at the time, the security personnel were in a middle of a shift change as part of their job to patrol the building.

Though it remains unclear what exactly happened, the management had summarised by the CCTV footage and eyewitnessed accounts during the incident that the couple’s rude behaviour was triggered when they felt angered that the security guards somehow failed to babysit their kid.

“Please note that childcare duties are not specified within the scope of security duties in contract,” wrote the management in the memo dated 27 October, mentioning that the police have been notified of the incident and that action would be taken against the tenants in question.

Snapshots of the incident included in the memo show a man confronting a security guard in uniform before another person steps in assumingly to resolve the situation.

Amazingly, a first-person view of the incident, believed to have been captured by one of the security guards, was also leaked online.

At just over two minutes long, the video shows a man and a woman exchanging insults with the man behind the camera as a child sits quietly in the background.

“Security is irresponsible,” shouted the man, as the woman holds up her own phone to assumingly record the incident himself.

“Woah, it’s the security’s job to take care of other people’s children?” addressed the man behind the camera, before the family leaves with what appears to be baskets of laundry in tow.

Naturally, the viral incident was met with confusion, anger, and humour from netizens who had witnessed the peculiar scene.

Many had sided with the security guards in the issue, saying that they had done nothing wrong.

“Yes, it’s not the security guards duty to take care of the kid.” wrote one commenter.

“This is the first time I’ve read about someone asking a security guard to take care of their kid.” laughs another.

While others appeared to be more concerned over the fate of the child who was unfortunate enough to have been the reason for the incident that took place.

“That poor kid. It’s not enough that she was left there, the father had to insult people in public,” noted one commenter.

“Lead by example. Children are like a piece of white cloth that is dyed by the parent’s (character). This is especially so for small children.” concluded another commenter, who seem to echo what many were thinking in terms of how the parents should’ve acted in front of their child.

This opinion somehow holds true and is reinforced by the ‘social learning theory’ in behavioural psychology.

The theory basically explains how people, i.e. children, learn and develop their behaviour through observing and imitating what others do, i.e. their parents or guardians.

In the famous ‘Bobo Doll’ experiment conducted in the 60s’, psychologists documented that a child would typically learn aggression from the adults in their life.

The experiment basically study how kids would mimic an adult’s aggressive behaviour towards a toy after having watched the adults being hostile towards the inanimate object.

The Bobo Doll experiment demonstrated that children can learn aggressive social behaviours through ‘observational learning’ by simply being in the presence of violence.