She tried entering another mall without wearing a face mask too. 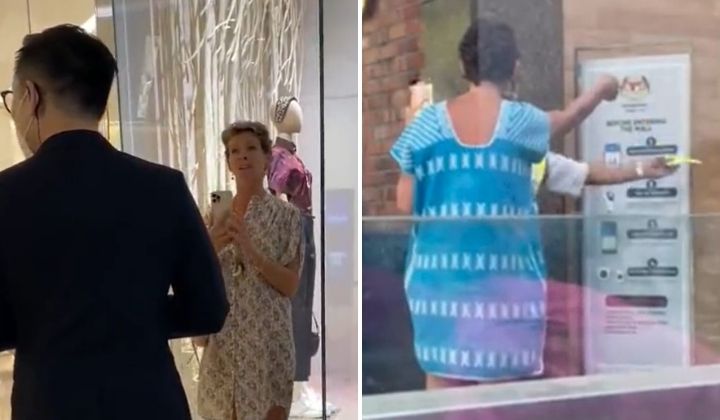 The foreign woman who caused a stir when she refused to wear a mask and tried to enter a luxury boutique in KLCC has been fined RM3,000 for two offences.

According to New Sraits Times, each compound is worth RM1,500.

Her first offence was the failure to adhere to the directive of the Health Director-General when she failed to scan the MySejahtera app when entering a premise in an area with internet coverage.

Her second offence was the failure to wear a face mask in the said premises.

Previously, the Caucasian ‘Karen’ claimed that she was pushed by a store employee when they refused her entry into the boutique because she wasn’t wearing a mask.

Her outburst was caught on video and she could be heard saying, “You can’t stop me! It’s a free country! You don’t own the shop.”

Since the video went viral, a few netizens shared that they have witnessed the same woman in other locations too.

In a report by The Malay Mail, Twitter user @nabilaaazeez caught someone who is believed to be the same woman on camera at Bangsar Shopping Center (BSC).

Again, she wasn’t wearing a mask so the security guard at the entrance denied her entry into the shopping mall.

“This time, she wanted to enter BSC but was denied entry because she wasn’t wearing a mask and it seemed like she was arguing with the guard at about 10 am this morning.”

“She then left the entrance after she was done recording him.”

“I managed to film her trying to enter the entrance of BSC as I was sitting in a cafe Burrow KL, which was opposite the mall’s entrance,” @nabilaaazeez said.

Since the pandemic is still not letting up, we should follow the SOPs to make sure everyone is safe and protected.