The lady was apparently there to return a bag she bought from the store. 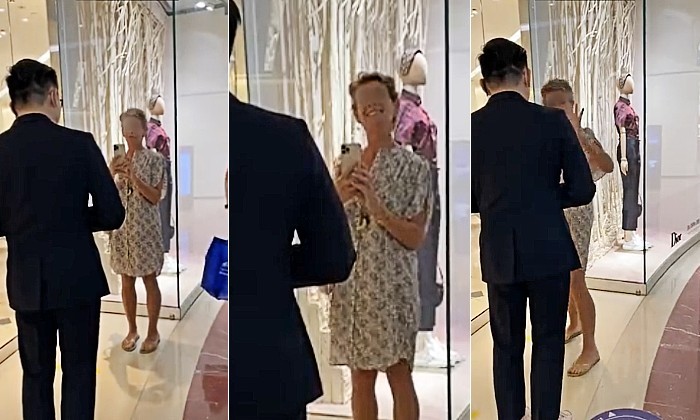 So this lady, who sounds like she’s British, had allegedly tried to enter the Dior luxury fashion store at the Suria KLCC shopping mall without wearing a face mask and was rejected by the store’s staff for doing so.

A video of the lady’s outburst was recorded by another shopper who apparently got held up in line outside the store as staff members tried to resolve the situation.

The 23-second clip, which obviously became viral, saw the lady arguing with one male staff at the store’s entrance and accused the man of manhandling her.

From the recorded conversation, apparently, the lady was there to return a “faulty” bag that she had bought from the store.

“When I went to walk in, he put his hands on me and pushed me,” the lady moaned, as she held up her own mobile phone camera to record the interaction.

According to Twitter user DFE, who posted the video online, the lady allegedly opposed the ‘no mask, no entry’ rule and said that those with masks were communist.

Was in a que at @Dior KLCC!!! No entry for no mask!!! This lady resisted and said those with masks are communist!! Applying “white entitlement” in Malaysia!! Kudos to the @Dior KLCC and @SuriaKLCCMall staff @Khairykj @KKMPutrajaya please find and fine her!!! pic.twitter.com/hXzi9difRg

The scene later continues with the woman still insisting to enter the store while exclaiming “You can’t stop me! It’s a free country! You don’t own the shop,” to the employees guarding the entrance.

One of our Karen ended up in Malaysia 😁🤣 pic.twitter.com/S8dtYfW1PA

Netizens who saw the video couldn’t help but call the lady a “Karen” – a globally used slang for describing entitled white women who use their “white privilege” to get their white way.

Besides asking for authorities to quickly take action against the lady, people were also curious about how she managed to enter and walk around the mall without having a mask on in the first place.

How did she managed to got thru the mall guards at the escalators / entrance door before entering the mall? Just saman dia RM10k pls

The peculiar moment also got the attention of Malaysia’s Health Minister Khairy Jamaluddin Abu Bakar who Tweeted that he’d be looking into the matter.

“When in Rome do as the Romans do.”

When in Malaysia, please mask up. Regardless of the rules elsewhere. @KKMPutrajaya is getting more information from KLCC.

By law, denizens (yes even the caucasian ones) are required to wear a face mask at all times while out in public.