Smoking is banned in 23 public areas including eateries, toilets, transportation and government office. 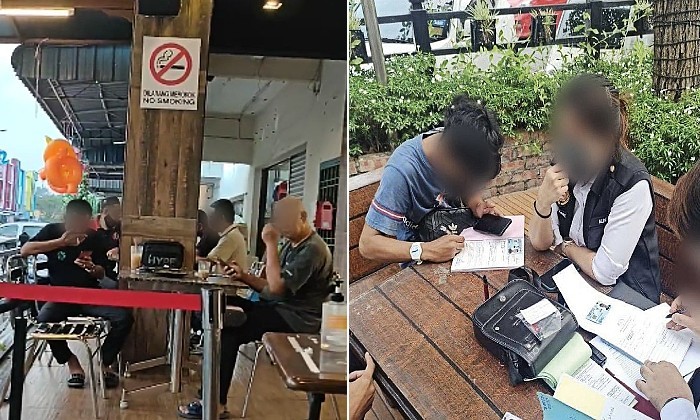 Authorities from the Health Ministry will be upping their enforcement game to look for and punish smokers who selfishly puff away in gazetted smoke-free areas.

Health Minister Khairy Jamaluddin Abu Bakar said that enforcers would constantly be on patrol to compound those who go against the rule.

Khairy had shared several pictures on social media warning of what would happen if people still want to smoke in public.

In 2019, the government had imposed a ban on smoking at restaurants and eateries nationwide under Regulation 11 (1)(d) of the Tobacco Control Regulation (PPKHT) Regulations 2004 (amended) 2018.

Those who still ‘light up’ or ‘vape on’ at these locations will be slapped with an RM150 fine for their first offence, RM250 for their second offence and RM350 if they continue to break the law.

Regulation 12 of PPKHT 2004 also state that eatery owners must ensure that their premises remain smoke-free and not provide smokers with tools to reinforce their habits such as ashtrays or even shisha or hookah services and make sure that they have the “no smoking’ stickers clearly displayed.

There are a total of 23 different places in Malaysia that had been designated as smoke-free areas under the PPKHT, including public toilets, public transportations, entertainment facilities and government offices.

However, it appears that a number of stubborn smokers still blatantly ignore this rule and simply smoke wherever they please despite proper warnings as shown in one viral video that the Health Minister was tagged in.

The clip witnessed a group of smokers puffing away at a restaurant in Johor Bharu right under a no-smoking sign.

The issue is seen as concerning considering Malaysia was still in the midst of the Covid-19 crisis.

Though evidence on the matter is inconclusive, medical experts do warn that the airborne novel coronavirus may be transmitted through second-hand smoke.

Additionally, according to the World Health Organisation (WHO) smokers and even those who consume smokeless forms of tobacco, like chewing tobacco, are more vulnerable to contract, transmit and suffer from severe side effects of Covid-19 infections.