Pok Jie and his buddies collected and tracked through 1KMs of dense jungle and mountains to properly dispose the trash. 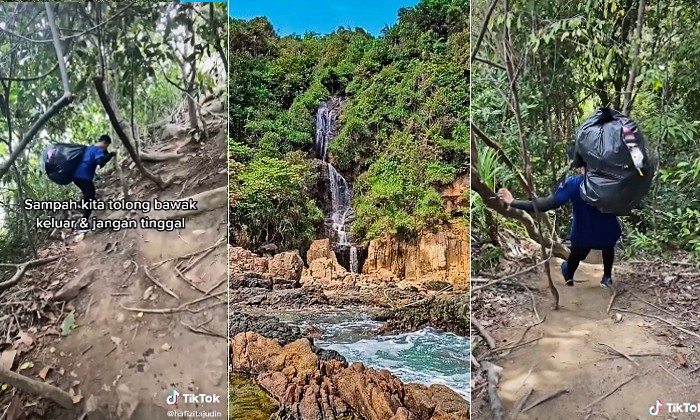 “How can one enjoy nature’s beauty like this?” asked 27-year-old Muhamad Hafizi Tajudin after he and his friends had to cancel their weekend hiking and picnic trip to the Janda Mandi waterfall in Kemaman, Terengganu to instead clean up the area that had been left littered with trash by irresponsible visitors.

Muhamad Hafizi A.K.A. ‘Pok Jie’, had started a viral conversation on how the public should work together to keep our natural surroundings clean and unpolluted after posting up a video of their efforts to tidy up the popular recreational area.

The clip shows Pok Jie scouring the area for plastic bottles, facemasks, leftover food and other disgusting garbage left by obviously disgusting people who couldn’t care less to pick up after themselves.

“When we go hiking or whatever, we must take care of nature’s beauty. How can one enjoy nature’s beauty like this?” groaned the nature lover as he is seen carrying one giant plastic bag full of trash collected from the area.

It’s reported that Pok Jie’s clean up crew managed to amass about 10KGs worth of trash that had been left there to rot and it had taken them about 40 minutes to track through 1KM of mountainous jungles in order to dispose of the garbage properly at the main entrance of the recreational site.

Pok Jie told Sinar Harian that he felt deeply satisfied for having cleaned up the area.

The Janda Mandi or ‘bathing widow’ waterfall can be considered a natural wonder here in Malaysia as it is one of the few waterfalls in the country that flows straight into the ocean.

Measuring between 80 to 90 meters tall, the waterfall sits right on the edge of the Teluk Kalong beach, and during low tides, visitors can actually stand under the waterfall and live out their wanderlust fantasies.

According to local legend, the Janda Mandi waterfall got its name when a sailor’s wife had disappeared after bathing in the waterfall following her husband’s death by her own hands.

As the story goes, the husband and wife were on a ship together when she accidentally poked and killed her husband with a needle while sewing.

In her grief, the widow had asked the ship’s crew to drop her off at the waterfall supposedly to wash away her sorrows but then disappeared, never to be seen again.

However, people say that sometimes you can still see glimpses of the grieving janda bathing in the waterfall from time to time.