Police say that the area was a no-parking zone and the owners of the vehicles cannot claim for damages. 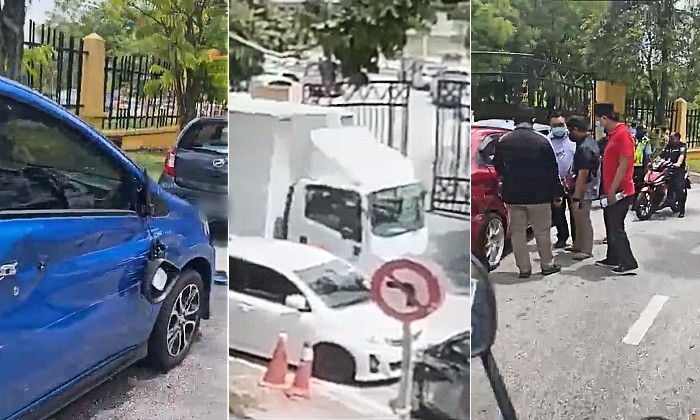 Malaysians are playing the blame game online over who’s responsible for the viral traffic incident that happened near a government office building in Putrajaya on Thursday (21 October).

Videos showing the moment and the aftermath of a lorry colliding with cars parked illegally on the sides of a road behind the ‘Parcel E’ government complex recently received a lot of attention after it was shared on social media.

One of the videos saw the white lorry hitting several vehicles as it squeezed its way through the path that was made narrow by the cars parked on both sides of the street.

Another clip showed the full extent of what had happened – as people who were assumed to be the owners of the many more parked cars along the long road came to inspect the damage done to their vehicles.

According to official reports, as many as 10 cars were damaged during the event, and by the looks of it, some worse than others.

Police say that the lorry driver in question had been called in to provide a statement over what had happened.

The owners of the vehicles involved in the incident also came in to file their reports.

The case was being investigated under Section 42 of the Road and Transport Act 1987 (Act 333) for reckless and dangerous driving.

Sentiments online clearly have some people mad over the incident and blamed the lorry driver for their actions.

However, many also said that the lorry driver was not at fault in the incident because of the simple fact that the damaged cars were parked illegally by the sides of the road.

Not a parking space. Park at your own risk 🤭 https://t.co/wA0WvRpenp

Some even idolised the driver for what it did and implied that they would have done the same if placed in a similar situation.

Others also took to deconstructing the root cause of the case.

People basically pointed out that the lack of proper amenities such as available parking spaces and a better public transportation system would have prevented such incidents from taking place.

At first aku marah dgn pemandu lori but then bile tau those are not actually designated parking spots, tak jadi marah. This is more of an issue with urban planning. https://t.co/Rj6hKw9kVp

Some also alluded to the fact that Malaysia’s ‘car-centric‘ infrastructures and planning has affected how our society behaves.

Not going to mention who I think is wrong here, but this happens when we, as a society, are too dependent on cars that everything and everywhere becomes a parking space. https://t.co/tkClOAQ3Gg

So selfish of them to have cars. https://t.co/Tpo3rGRy5N

According to police, they would conduct more enforcement operations in the area to prevent people from illegally parking and issue tickets to those who still disobeyed the law.