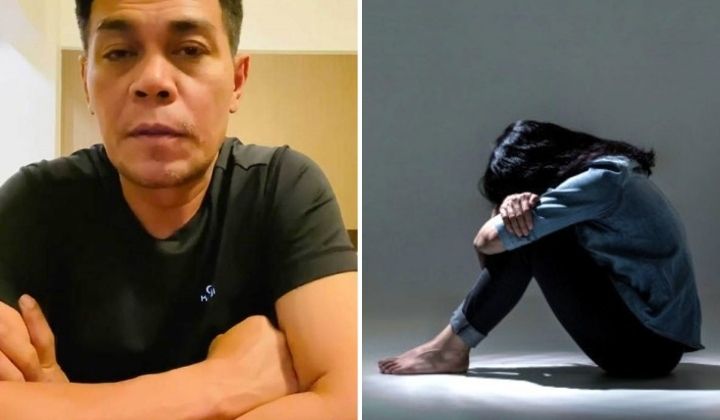 Fauzi Nawawi, a Malaysian actor who was under fire for his casual comments about enjoying a rape scene, has now hit back at critics instead.

The 48-year-old actor took down his apology video from Instagram after a day. In its place, he posted a cryptic and passive-aggressive response that seems to be lifted from Tiktok.

“God won’t forgive the critics until the person [who was criticized] has forgiven them. Be careful,” Nawawi wrote in the caption. The 30-second video was accompanied by an Islamic preacher’s voice in the background.

He later put up a second video with a string of text stating, “Those who are patient have no regrets. Their pain will be replaced with happiness they’ve never dreamed of.”

Nawawi was criticised after the Rumah No. 107 interview clip, which was aired back in June, went viral on Tuesday.

In the interview, he recounted how he had to hide his enjoyment filming the rape scene in the film Anak Halal (2007) and didn’t stop there. He went on and described in detail how the rape scene was filmed with his co-star Raja Farah Aziz, pointing out her tight shorts and how she spread her legs.

Nawawi’s public apology did little to quell criticisms when he tried to explain why it happened.

“When we were shooting this segment, I had asked the production staff to censor the sensitive parts because whenever we talk among men, we cannot really control ourselves,” Nawawi said, showing how he has not fully understood why the whole conversation was wrong in the first place.

DJ Shuk Sahar, one of the hosts on the talk show, apologised and asked forgiveness. According to mStar, he explained he refused to say anything more because he doesn’t want to mistakenly say something and cause more hurt.

“If it’s possible, I don’t want to go into detail with the issue. It’s not because I want to run away but what happened involved other people..not only me,” he said.

Nawawi’s tactless comments on live television were met with backlash from local celebrities as well.

Actress Lisa Surihani took to Instagram to voice her concerns. “The allowance of rape scenes has crossed its line to glamourizing and normalizing sexual violence against women,” she wrote on her Instagram Stories. “Talking about rape in such a manner, speaks volumes about the LACK of realization of how WRONG this is.”

Sepet star Sharifah Amani pointed out Nawawi’s lack of respect for his co-star on Twitter. “Disgusting, disrespectful, disappointing,” she wrote. “This is what happens when there is no respect for one’s career, colleagues, and among human beings. I don’t understand how this was allowed, from filming to airing of the show. Did no one see how horrible it was? How was this allowed on mainstream [TV]?”

Bront Palare, Nawawi’s other co-star in Anak Halal, called for the end of rape jokes. “Nothing can mask the feelings of regret. We need to be better than this #NoMoreRapeJokes,” he said.

How And Why Rape Culture Harms Society

“Sexist jokes and rape jokes may not seem like that big of a deal because they are verbal and not physical, but they contribute to the same way of thinking that fuels real-life violence,” Thambiah said.

These jokes are themselves a form of violence because making light of rape and sexual assault re-traumatise survivors and victims.

“These types of comments and behaviour may cause harm by re-traumatising survivors, where they may feel that the violence they experienced is a source of entertainment for others,” Thambiah told Kini.

Malaysia Mental Health Association (MMHA) president Dr Andrew Mohanraj points out that the lack of empathy and treating topics like these in a light-hearted manner are probably signs of deeper issues.

According to Mohanraj, men who talk about rape in a casual tone tend to lack empathy, exhibit narcissistic traits and are hostile to women.

“Although some might talk about it in the light of sexual gratification or sexual interest, it is more about demeaning people,” he added.