The motorcycle he sold was a cherished gift from his late wife. 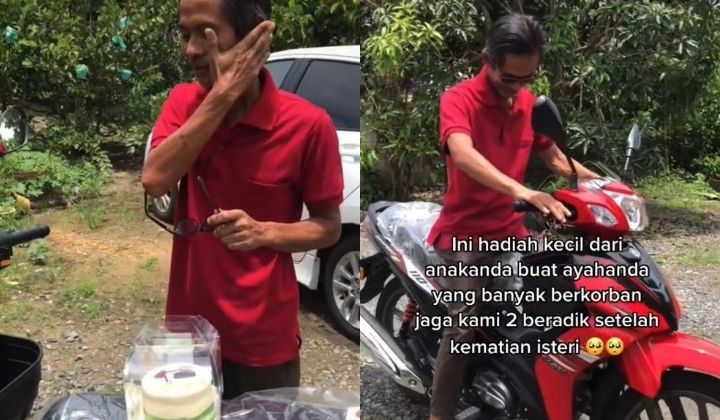 Five years ago, Wan Razali Wan Mohd sold his beloved motorcycle so that his daughter could further her studies. The prized Honda EX5 was sold to a used vehicle agent for RM1,000 and the money was used to pay off his daughter’s college fees.

He found it hard to part with the motorcycle because it was a birthday gift from his late wife about 20 years ago. His late wife knew he preferred riding a motorcycle instead of driving. As such, the gift held great sentimental value and a reminder of happier times.

After she passed from a fever, he was jobless but had to make ends meet to support his family.

All of his sacrifices to make sure his children were cared for bore fruit today. The father of two in Kampung Pulau Serai, Terengganu got a surprise of his life when his daughter, Wan Nuraisyah, gifted him a brand new motorcycle on his 58th birthday.

In the viral Tiktok video by @wanaisyahs009, Wan Razali could not hold back his tears at the sight of the red motorcycle.

In the video, the stoic-looking man wiped off tears of joy before trying out his new ride. “My father has given up a lot, including the motorcycle given by my late mother, to ensure that I can continue my studies. I now have a job and a stable income,” Nuraisyah said.

“I felt sad because my late wife gave me a motorcycle and now my daughter is doing the same. I do not expect anything in return (from my daughter) as it is my fatherly duty to provide for her,” Wan Razali told Harian Metro.