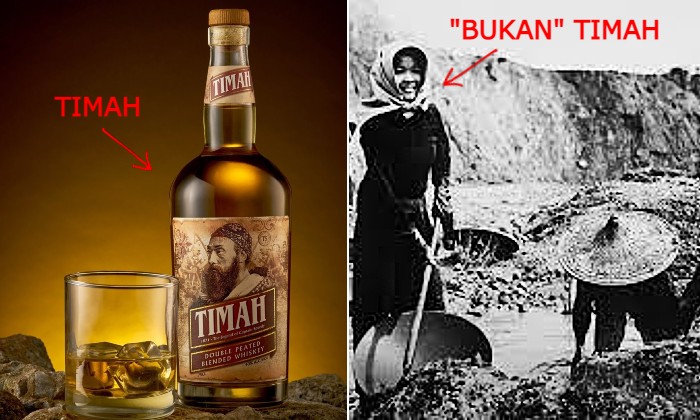 So this local, award-winning liquor company had to come out with a clarification on why their brand was called ‘TIMAH’ Whiskey.

Read More: For The First Time Ever, A Malaysian Whisky Has Won At The World Spirits Competition

The product’s branding had apparently stirred quite the buzz when people were said to have misinterpreted and even felt insulted by it, for some reason.

See, the way we figured was, people may have confused the word “timah” with “Fatima” or “Fatimah” – an Arabic word meaning, “one who weans”, which is also a popular name given to female Muslims.

So Timah responded with a neat explanation behind the spirit of their label.

They say that the word “timah”, meaning “tin” in Bahasa, was given as a nod to old Malaya’s tin mining era (you know, back when the British Empire colonized and stole our precious natural resources. LOL!)

Timah or ‘bijih timah‘ is defined in the Kamus Dewan dictionary as a whitish, malleable metal ore that’s extracted from the earth.

In fact, Malaya was once the largest timah producer in the world during the 19th century.

Meanwhile, ‘ikan timah’ is a species of saltwater fish that’s silver in colour and is best served fried.

Timah Whiskey also clarified that the man depicted on their liquor bottles was in fact a popular British explorer by the name of Tristram Charles Sawyer Speedy or ‘Captain Speedy’ for short – a man who they say was responsible for bringing over the whiskey culture to our part of the world.

Timah says that their name was chosen because of this history and any interpretation that’s not related to the country’s tin mining industry was false.

Timah is meant to be enjoyed by non-Muslims above the legal alcohol purchasing age.