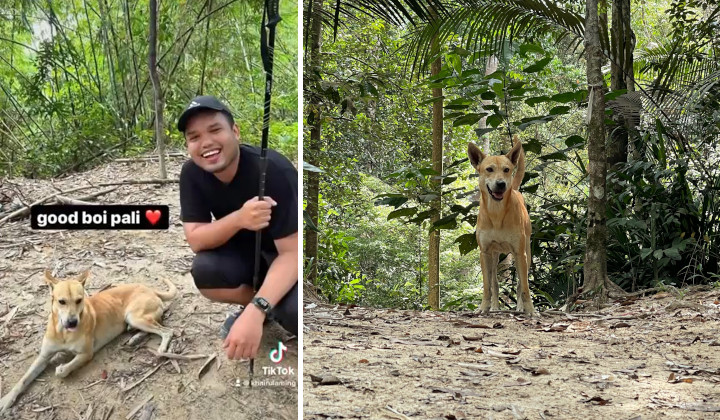 When Khairul Aming, a food content creator and owner of Sambal Nyet, went hiking with his friends, they were welcomed with a pleasant surprise.

They thought their trek across the jungle was going to be routine, but they were joined by one of the friendly guardians of the trail. A good boi pupper they call Pali.

According to Khairul, Pali followed the group through the 12-kilometre hike after being given a biscuit as a treat.

Pali would make sure the trail is safe.

The self-appointed guide dog did not have a name then it joined the hike, so the group of friends called it Pali.

Pali took the group right up to the river and waited for everyone to have their fun in the water and followed them back.

Khairul added that Pali was fed with sandwiches and nasi lemak along the way as a thank you for being such a good trail buddy.

Khairul shared his experience in a short video that trended on Twitter. His little story time got over 28,000 retweets and 53,000 likes.

In response to his adventure, many shared their experience with self-appointed trail guide dogs.

It also looks like Pali is an experienced good boi.

we saw her that day too I THINK 😍 pic.twitter.com/N0Xjl6Mstx

Some say that there were three of them.

One twitter user noted that these puppers could save lives.