It took fire and rescue five-minutes to free the kitten from the pipe. 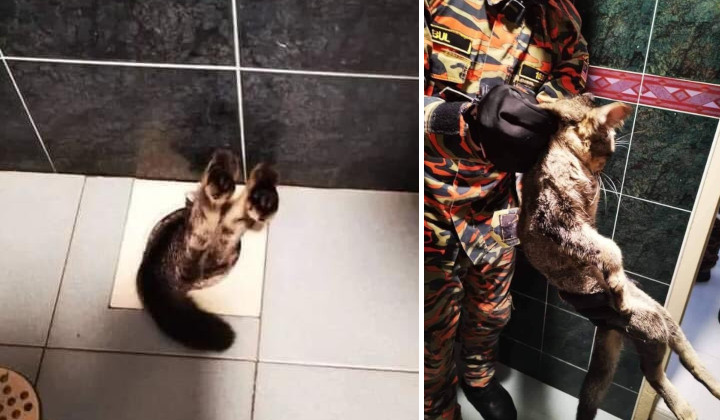 Cats do the darndest things. They can be little agents of chaos, unpredictable and mischievous.

Have you ever seen cats do silly things like crossing the road slowly even though it knows that a car is coming?

Or cats who wants to ride along on a motorcycle?

Cats can be weird sometimes and thankfully they are cute.

Their antics make up the very foundation of the internet.

Recently a Twitter user, @liyanalunia shared a funny story about a cat in an empty house in Melaka.

According to the story, the incident happened at 12:45 pm and was reported by a real estate agent who was cleaning up the pace to make it presentable.

The agent tried their best to help the cat but it was thoroughly stuck and the Fire and Rescue Department had to be called in.

What was the cat thinking?

The Fire & Rescue Department To The Rescue

A team from the Central Melaka Fire and Rescue Department arrived to help after receiving the call.

According to Harian Metro, the rescue operation was difficult because the pipe that the cat was stuck in is bent causing the body of the cat to be wedged in.

During the incident, only the two hind legs of the cat and its lail can be seen. The rest of its body is in the drainage hole.

The Fire and Rescue officers took five minutes to save the cat from its predicament.

Cats Do The Darndest Things

In the comment section of the tweet, netizens shared anecdotes of their own experience with weird cats.

Remember to keep an eye on your cat at home, too!

@iyLaFin says: I’m worried that my Simba at home ends up like this. It loves to hang out in the bathroom, otherwise it’ll be guarding outside the bathroom. Swatting at the feet of anyone coming out of the bathroom. Typical Simba, all orange cats are the same!

@furrahhh says: Cats are liquid. but this one is semi liquid because its legs are stuck.

@HdinHafizuddin says: Did it try to do a three and half somersault into that hole?

@liyanalunia says: Are cats are capable of such ridiculous nonsense.