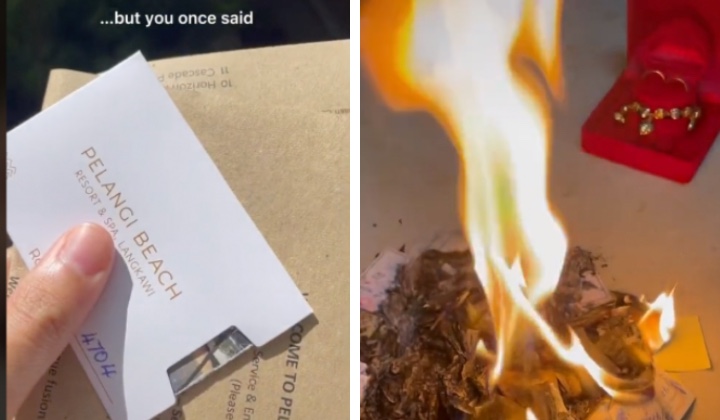 Many people who are in a relationship hopes to get married someday. However, not all couples can finally succeed in walking together for the rest of their life, even after getting engaged.

In the case of TikToker @ferd.mansor, it just wasn’t meant to be.

He shared a video of his heartbreak on TikTok which went viral on the internet shortly after.

In the video, he shared with everyone the story of how his lover broke off their wedding engagement with only one month to go before the big day.

He used a lighter to burn a RM15,000 cheque for the wedding dowry. The prepared wedding invitation cards were also put to flame.

@ferd.mansor then checked into Pelangi Hotel in Langkawi which he had booked earlier on. The luxury stay was meant to be a surprise to his future wife during their honeymoon.

This was originally our honeymoon place, and I had planned to surprise you.

However, the dream did not come true and the planned surprise was in vain. He decided to go there alone anyway in order to heal his wounds.

Later, he expressed gladness that his beloved woman chose to reveal her true self before the marriage had been officiated.

Despite it all, he still wishes for her happiness.

It’s Okay To Trust Once More

After the video was posted on TikTok some three days ago, it attracted one million views and more than 5,000 comments.

Many netizens wish him well and hope that he could get out of the heartbreak as soon as possible.

Some netizens comforted him and encouraged him by saying that he will find someone better who will be so sure of him.

TikTok viewers encouraged him with comments such as ‘You will be fine. Keep enjoying life’, ‘You deserve a better one…stay strong’, ‘Be strong, you will find someone better’.

An Act Of Kindness Highlights Flaw In National Infrastructure