The 26-year-old suspect was stationed at the Kem Batu Kentonmen army base in KL and has served for 7 years. 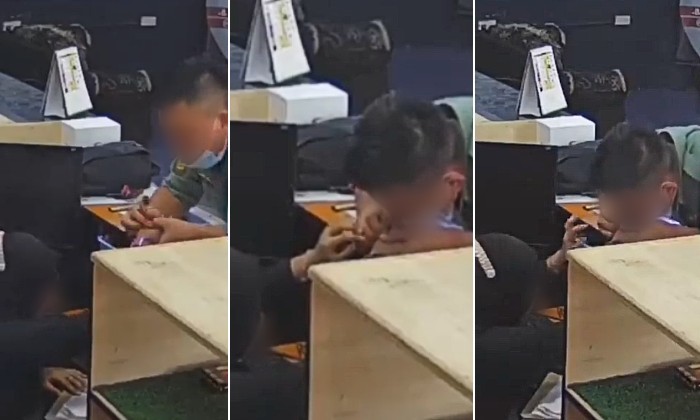 A member of the Malaysian Armed Forces (ATM) was arrested after a viral video allegedly showing him sexually harassing a female employee at a local vape shop in Taman Keramat, Selangor circulated online.

The clip had apparently captured a man wearing a private’s uniform holding on to the woman’s hand and pressing his mouth against her fingers while smoking on a vaporizer.

Social media comments reveal that netizens were generally disturbed and disgusted by the behaviour shown in the video.

While some had argued that the woman seen in the video had just sat there and did nothing, others came to her defence and implied how difficult and even dangerous it can be for women to fight back against their assaulters.

Been there. It is not easy as we think actaully

Wtf? And to those questioning why she didnt do anything. Are you a woman? And if you are, have you been in the position of being harrassed before? Cakap senang ah, babi pun boleh terbang https://t.co/S6K7hLhO19

For those yang blame the girl, I pray to god, may you date the most crepiest dominant hot tempered guy with the most weirdest fetish ever. Aamiin https://t.co/2nxR9UYgHG

According to police, the 26-year-old suspect was arrested at a property in Taman Titiwangsa, Kuala Lumpur at midnight on Thursday (7 October).

The man was apparently stationed at ATM’s Kem Batu Kentonmen army base in KL and has served in the armed forces for seven years.

Police had also confiscated the man’s uniform and equipment that he wore during the viral incident and found that the suspect urine samples were clear of drugs.

The suspect will be held on remand for four days till 10 October while authorities continue the investigation.

The case is currently being investigated under Section 354 of the Penal Code (Act 574) for the crime of assaulting a person’s modesty, and if found guilty, could land a person with a prison sentence that may extend to 10 years, fines, or whipping by the cane.