FoodPanda has since apologized for the Bollywood-inspired musical ad is part of a campaign that also featured other genres of music videos. 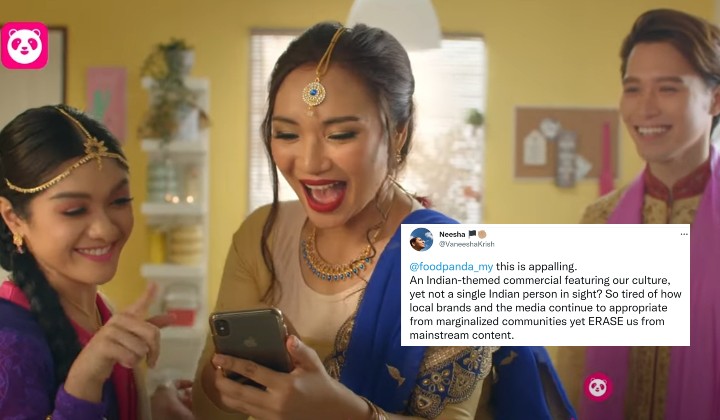 [Update: FoodPanda has released an apology. See updates below in italics.]

Recently, food delivery app FoodPanda came under fire for an ad titled “Pollywood”. In it, actors sang about the app in a Bollywood-esque way while dressed in traditional Indian costumes.

The campaign features well-known Malaysian celebrities such as Adiba Noor and Nadia Aquila.

This is actually part of a series of ads for their #TakkanTakTahu? campaign featuring multiple genres of music, such as k-pop, pop, rock, and more.

Netizens who saw that ad quickly realized that despite the Bollywood theme, there were no Indian talents involved in the ad. Since Deepavali is also around the corner (4 November), they also came to the conclusion that it was an entirely inappropriate ad for the festival.

Some claimed that this is cultural appropriation, while others noted that the Indian community has consistently been marginalized and erased far too often.

@foodpanda_my this is appalling.
An Indian-themed commercial featuring our culture, yet not a single Indian person in sight? So tired of how local brands and the media continue to appropriate from marginalized communities yet ERASE us from mainstream content. pic.twitter.com/W3H25BzFDo

Food Panda has an Indian MD, yet still manage to royally screw up a Deepavali Ad…

Can’t wait to find out the agency, the production house and of course the cost for shooting the Oscar nomination worthy ad.

Wow the absurdity and injustice of this all, and no one batted an eye lid. Would having a full indian cast for another festival be acceptable food panda? Uninstalling Foodpanda.

“I don’t see what’s wrong with it”

Others have come out to defend the ad, saying that there’s nothing wrong with it if people of other cultures want to join in and explore the Indian culture.

idk why this generation getting so sensitive, bende cam ni also wanna complain. rilek la. i feel this is dope! so what if other cultures exploring our culture?? we also should explore other cultures. come out of the shell pls.

yg aku fhm pasal foodpanda ad tu
1. it’s not a deepavali ad
2. it’s an ad abt a family yg enjoy different genre of music from pop yea yea to bollywood
3. bollywood is from north india and indian di malaysia is from south india
4. bollywood is a genre that is enjoyed by many ppl

Teasers to a larger story

According to FoodPanda’s press release, the short music videos that are currently live online are mere teasers to a much larger story.

The minisodes Delivery Ke Hati Seri follows the story of Seri and her three generational family as they go through their daily lives using various FoodPanda features to different songs.

The musical inspirations include Barbershop Quartet on our loyalty programme, K-Pop rapping about stacking discounts with promo code, and Bollywood on group ordering and many more.

At the time of writing, FoodPanda has yet to release a statement on their creative decision on the talents used in this campaign.

Foodpanda’s Head of Marketing Vanita Menon Kris has since apologised for the creative decisions that led to the divide.

“We understand that there might have been a misunderstanding with the video in question being singled out. However, this specific video is part of a bigger campaign and not a Deepavali ad. foodpanda would like to humbly apologise, as it was never our intention to cause any discomfort to our consumers as we stay committed to delivering joy to your doorstep.”