Malaysian non-Muslims are tired of being targeted by hate. 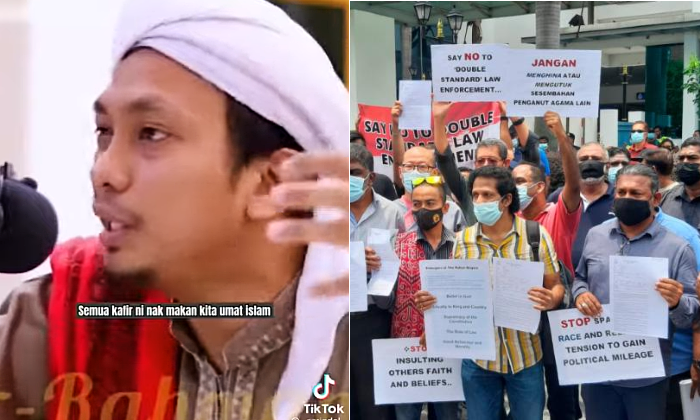 Subscribe to our new Telegram channel for more updates and stories.

Thousands of police reports were lodged against a local preacher by the name of Syakir Nasoha after a video of one of his sermons was posted online.

The clip that’s circulating on social media has the Ustaz supposedly warning Malaysian Muslims against a plot to destroy their religion.

During the end times, the enemies of Islam will swarm you like flies to a meal, scrambling to eat. The same is true today, the non-believers are clamouring to kill Muslims. Gentlemen, indeed the ones leading this are the Jews and Christians, but remember, who are the ones who bombed the mosques? Is it the Americans or the Israelis?

“No, the murderers are Buddhist. Who murdered the Muslims in Pakistan? Who murdered Muslims in India? It’s the Hindus. Remember, both these religions are here in Malaysia,” said the preacher in the clip, completely missing the point that those countries have different political situations, besides the centuries worth of Muslim-on-Muslim violence recorded all over the world.

Can’t you see? Don’t tell me you can’t see. This goes to show they are out to get us. All the non-believers want to devour us Muslims, want to destroy Islam. That’s why they don’t like Islam. Just say Islam and they’ll get angry.

With the video now viral, and the Ustaz accused of defaming non-Muslims, the public wants immediate and stern action to be taken against the man.

Global Human Rights Federation (GHRF) President S. Shashi Kumar was quoted as saying that non-Muslims in Malaysia are fed up with being the targets of hate speech.

He also proposed for policymakers to quickly introduce laws that would outlaw religious and racial hate in the country besides telling the National Unity Minister Datuk Halimah Mohamed Sadique to step down for doing a supposedly poor job.

When one insults Muslims or Islam, actions are taken immediately and that individual is charged. However, it is not applicable when it happens the other way around. We have seen cases against Muslim preachers dropped, even though there is concrete evidence against them.

The human rights activist also eluded to the fact that the root cause of racial and religious disharmony in Malaysia starts at the very top of our society.

The core of this problem comes from the government itself. The MPs (Members of Parliament) and ministers always call the people penumpang (occupants) and pendatang (immigrants). What kind of leader are you? Treat everyone as Malaysians and treat us with respect.

The police have reportedly begun looking into the matter.