A combination of “Robot Chicken”, “What If…”, and pop culture. 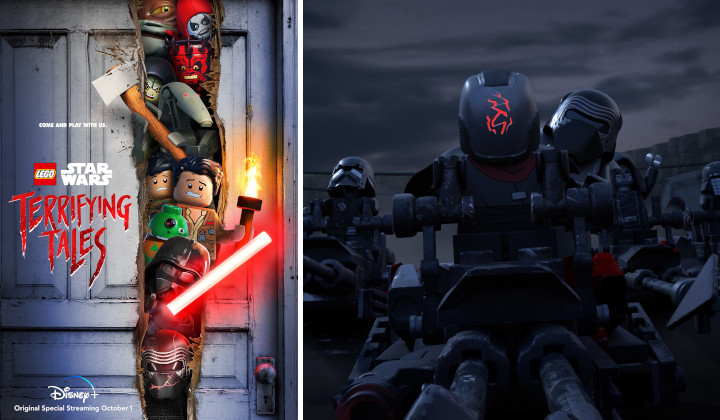 LEGO Star Wars Terrifying Tales is a quirky one. It began with Darth Vader’s loyal servant Vaneé, who was left to take care of Vader’s castle on the lava planet, Mustafar.

But then Star Wars: Episode VI – Return of the Jedi happened and neither Darth Vader nor Darth Sidious came back for him.

Fast forward to after Star Wars Episode IX – Rise Of Skywalker and we see Poe and BB-8 crash landing on Mustafar where Graballa the Hutt is trying to turn Darth Vader’s castle into the galaxy’s first all-inclusive Sith-inspired luxury hotel.

Ever loyal, Vaneé and his Droid NI-L8 (got to love that foreshadowing name) still take care of the castle (which is impressive out of print LEGO set by the way).

As the heroes venture deeper into the castle Vaneé shares three amazing stories: a possible explanation of how Ben Solo became Kylo Ren, a tale of a powerful lightsaber that curses its user, and a story of what would happen if Luke Skywalker turned to the Dark Side instead.

Slowly with each story, Vaneé’s true intent is revealed.

More Than Just A Parody

Although LEGO Star Wars Terrifying Tales is a parody that’s more comedy than scary, it is still better than the sequel trilogy.

In fact, the first tale even tried to fill in the blank that is left from the three movies. Here the Knights of Ren got more screen time than they did in the movies.

It’s not serious, but it is a lot of fun.

My favourite tale would have to be the third story, a parody of The Monkey’s Paw called the Wookie’s Paw. I guess they didn’t have the heart to maul an Ewok.

Anyway, all the stories are brimming with creativity and fun.

I also liked how LEGO is poking fun at Disney with Graballa the Hutt. Turning Vader’s castle into a tourist trap, that’s ridiculous. But not out of the question with that mouse.

I love how LEGO slipped in pop culture references and pokes (all of which you have to discover on your own) into the stories.

However it is a show for kids, so it felt like LEGO held back. If this was a Robot Chicken sketch, it would be so much funnier with more savage with its jokes.

LEGO Star Wars Terrifying Tales is only 44 minutes long, so it didn’t overstay its welcome. It didn’t feel too short either.

But in the end, what I really want is for LEGO to take off the kiddie gloves and make this animated Halloween special go the whole 90 minutes.

The genius behind the writing is there. You’ve seen the LEGO Movies and the LEGO Batman Movie right? The stories in LEGO animation can be downright amazing.

Well, here’s hoping LEGO gets to do more Star Wars anthologies in the future.

Star Wars: Tales Of The Jedi – Choosing The Path Of Light Or Darkness [Review]