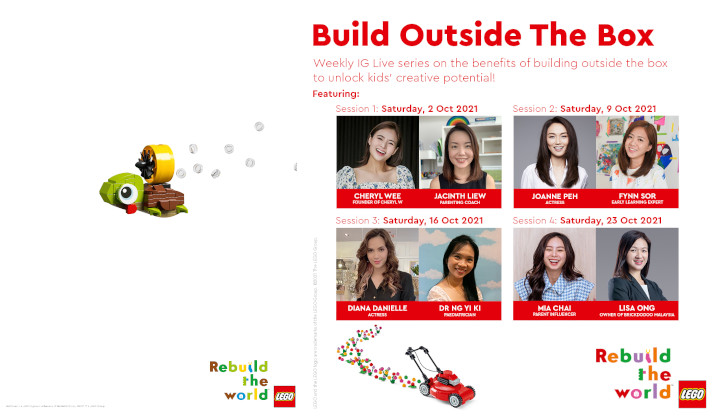 The LEGO Group (the folks that make LEGO) launched its global Rebuild the World campaign this year with its debut in Malaysia.

Throughout October, LEGO Group will be partnering local early learning and parenting coaches alongside parents to share their experiences as well as tips for parents through weekly Instagram Live sessions.

The campaign aims to show how children are masters of creative problem solving and that they can creatively overcome challenges by building and rebuilding with LEGO bricks.

The hosts will discuss tips on creating an environment to encourage creative, unstructured, and independent play with children, and take questions from viewers.

There will also be giving away two LEGO sets with a total value of more than RM600 during each session.

Parents are also welcome to share the creative LEGO builds that their children have created on Instagram, with the hashtag #LEGOMY and #RebuildTheWorld.

Through the Rebuild the World campaign in Malaysia, we aim to encourage parents to guide and facilitate the play experience for their children, as well as to inspire families to problem-solve together by building and rebuilding with LEGO bricks.

Here’s the when, where and the hosts of each session:

The campaign was created by the LEGO Group’s internal creative agency, the LEGO Agency. The fully integrated global campaign will run across a variety of channels including TV, digital, Spotify, out of home, e-commerce channels and LEGO stores in over 20 countries. It will also be supported by a global creator campaign, as well as a series of activations and events in markets where the LEGO Group has a presence.

To find out more about the LEGO Group’s Rebuild the World campaign, visit: https://www.lego.com/en-my/rebuild-the-world