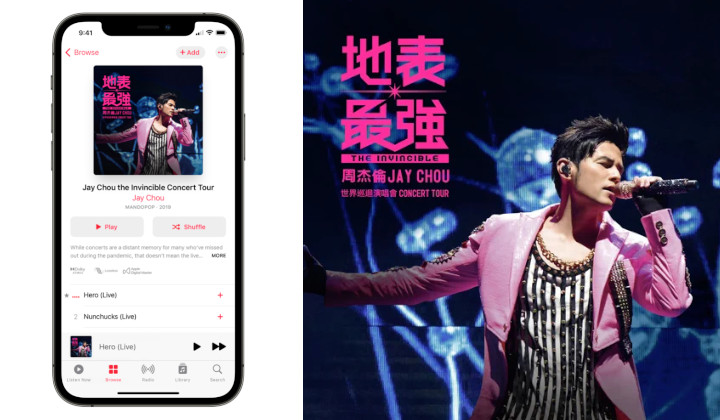 With the pandemic putting a hold on many live concerts, Jay Chou The Invincible Concert Tour allows fans to reimagine themselves at a concert and indulge in an immersive live atmosphere, with over 20 well-known classics by Chou from over the years.

Available on Apple Music, the album was recorded during Mandopop hero’s career-spanning show, with a setlist of hits covering the full range of his eclectic and innovative style.

Remastered in Spatial Audio with Dolby Atmos and available exclusively on Apple Music, the recording puts you right into the crowd and on the stage.

Big thanks to all the fans who have supported me all the way. After growing with me for the last 20 years, I believe that they will continue to see me surpassing myself in the future. I hope that Chinese pop music can get more attention around the world

But, if you want more, there’s also Jay Chou Universe, a series of curated collections and playlists to honour the iconic artist. You can find it here.

Apple Music Is Available On Other Platforms As Well

If you don’t own an Apple product, you could still listen to Jay Chou The Invincible Concert Tour. Apple Music is available on popular smart TVs, smart speakers, Android, and Windows.

Since Apple Music is a subscription, there are no extra fees to listen to the album.

However, you will not get the Spatial Audio experience unless you use the latest version of Apple Music on an Apple device and use compatible Apple or Beats headphones.

It is a virtual soundstage that is larger, detailed, and richer than stereo. It is paired with the latest dynamic head-tracking technology released in iOS15.

Dynamic head-tracking tracks the subtle movements of your head to provide a more convincing illusion that the music is coming from all around you — not just from your headphones.

If you turn your head, the sound will reorient around you.