A mini-tornado had damaged homes in Port Dickson. 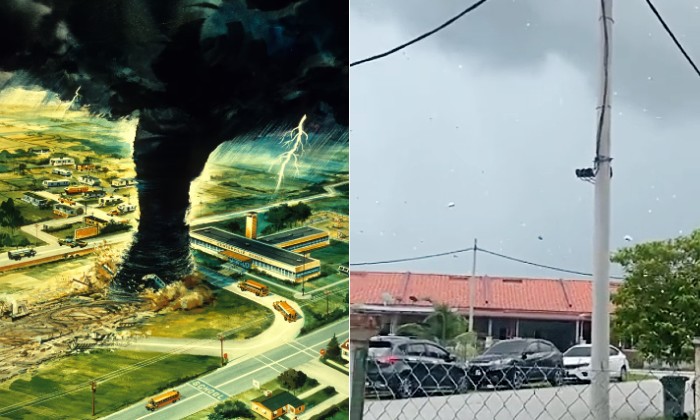 Malaysians were blown away by the sight of a mini-tornado that whirled up in the middle of a neighbourhood in Port Dickson, Negeri Sembilan on the morning of Wednesday (29 September 2021).

Footage of the incident, which reportedly occurred at around 10 am and was believed to have been captured by a resident of Taman Bagan Kurnia, shows dark skies overlooking the neighbourhood as pieces of debris are lifted off the ground by strong winds.

As many as 10 homes were damaged from the incident – having their rooves torn apart by the swirling column of air.

Earlier in March, a similar weather event had occurred in the Yan district in PD. The incident had caused as many as 50 homes to be damaged and around 70 people had to be evacuated.

Though rare, it’s not really uncommon for people to witness a twister forming in and around the country from time to time.

However, what most people would describe as a tornado is actually, in fact, a similar natural phenomenon known as a landspout.

See, a tornado is formed when a rotating column of air, usually during severe thunderstorms, descends down from the clouds to touch the surface.

Landspouts, and waterspouts, work in the exact opposite direction and occur when air from the surface, is instead, sucked up into the clouds causing the rotation.

There have been numerous reports of land and waterspouts forming across the country and the public are generally advised to stay clear of these mini-twisters for their own safety.