The Health Minister and CITF-A Chairman have set the record straight. 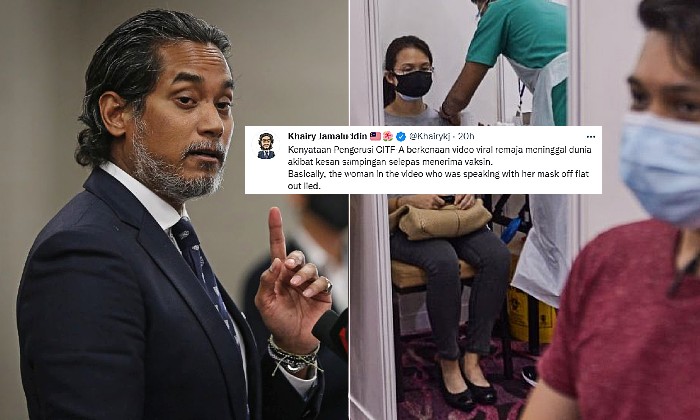 The Health Ministry (KKM) shoots down claims made by a group of activists that five Malaysian teenagers had died after Covid-19 vaccinations.

Videos circulating online shows a group claiming to be in solidarity with the families of the youths, who they allege, died after getting vaccinated and hospitalised from adverse vaccine side effects.

“Don’t gamble with our children’s lives,” said a woman in a clip, asking parents to report such cases to the authorities instead of just broadcasting them on social media.

In response, KKM went straight to work to debunk every single one of their claims.

A statement signed by Deputy Health Minister and Covid-19 Immunisation Task Force-Adolescent (CITF-A) Chairman Datuk Dr Noor Azmi Ghazali, presented KKM’s evidence against all the claims made by the group.

Claim 1:
“Two students from Sekolah Menengah (secondary school) Tasek Damai, Ipoh, died after being given the vaccine and one of our children in Lahad Datu had died after being vaccinated in Sabah.”

KKM investigation:
A female 17-year-old Form 5 student from SMK Tasek Damai in Perak with type 1 diabetes and who was dependent on insulin, died on 18 August 2021 after being infected with Covid-19 – before the Covid-19 National Immunisation Program for teenagers (PICK Teen) even began.

Another 17-year-old male student from the same school, who had congenital heart disease was brought into the ICU for a case of bacterial infection and died soon after on 17 September before being vaccinated. The cause of death was determined to be “sepsis with underlying congenital health disease”.

There have been no teen deaths related to Covid-19 vaccinations reported in Lahad Datu, Sabah.

Claim 2:
“We show our solidarity to a mother who both her kids are now suffering from AEIF (adverse events following Covid-19 immunization).”

KKM investigation:
Two teens, both 16 and 18, were hospitalised in a private institution for having side effects after taking the Comirnaty Covid vaccine.

The 16-year-old have been released from care while the 18-year-old was still under treatment and observation. The National Pharmaceutical Regulatory Agency (NPRA) has yet to receive reports of the teens’ side effects.

Responding to the matter, Health Minister Khairy Jamaluddin tweeted that the individual seen speaking in the viral videos, “flat out lied”.

Sentiments online also reveal a majority of Malaysians asking for the authorities to take immediate action towards the group of activists in spreading fake news.

She lied, then will the Gov immediately take action against her and the cohorts? https://t.co/TuWSjhSCes

KKM reminds parents to immediately seek medical attention for their kids if they experience side effects such as chest pains, difficulty breathing, swelling and excessive itchiness after Covid-19 vaccination.