The WLSSCH Temple is located in Salak Selatan. 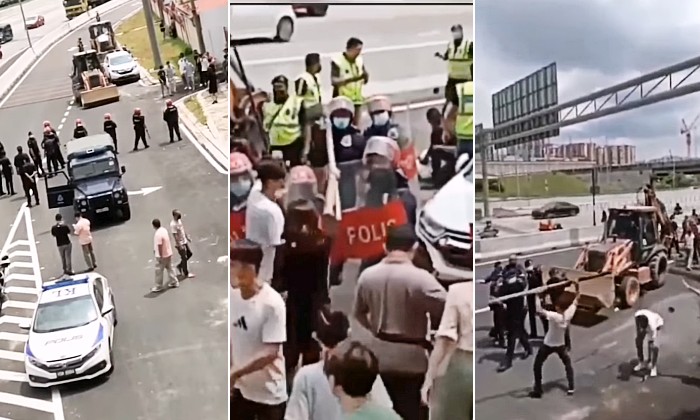 So this huge fight happened between police, a construction crew and a group of worshipers at the Wong Low Shen See Chee Hew Temple in Cheras yesterday (September 28).

Viral videos of the incident show a squad of police officers, some in riot gear, having a scuffle with a group of people outside the temple next to a highway.

The group was even seen protesting in front of the temple as well as attacking a big-wheeled bulldozer that was parked beside the road with sticks.

People were heard screaming in the background and claimed that police were assaulting citizens.

Some worshipers reportedly claimed that they were injured by police and that the authorities tried to force them into Black Maria police trucks.

So what went down?

Well, apparently the whole thing was a hoarding misunderstanding.

It is said that worshipers had thought that authorities were there to demolish the 60-year-old temple.

There shall not be any joy or happiness in demolishing any house of worship,let it be if it belongs to minority or majority. Community leaders must attempt to resolve this with great social responsibilities. This is the Salak South Chinese temple incident. #socialcare pic.twitter.com/lKgFdiVQaq

A statement by the Cheras Police says that the Kuala Lumpur Lands and Mines Department (PTG) had, instead, wanted to build a ‘hoarding’ gate for a path leading to a school there, and police were sent in to assist.

They deny that there were there to tear down the place of worship and explained that some 30 men and women carrying sticks and iron bars had prevented the construction, broken machinery and attacked police officers.

The statement also read that police determined that the videos released online were meant for exploitation and to gain public sympathy while asking the public to stop speculating on the matter.

Four individuals between the age of 19 to 50 were arrested following the incident and the case was classified under Section 148 and 186 of the Penal Code for rioting and obstructing the duties of a civil servant.

Bukit Bintang Member of Parliament (MP) Fong Kui Lun later explained that confusion began because the temple committee had placed fences along a reserved road heading to some land behind the temple.

The MP was witnessed at the scene along with Cheras Police Chief Muhammad Idzam Jaafar who apparently managed to resolve the issue.

After I arrived at the scene, the matter was resolved. I spoke to the OCPD (Izham) to give them some time and space.