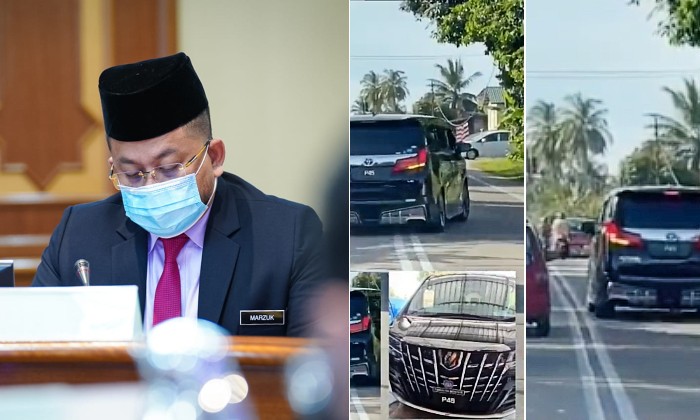 “Sorry and thanks for the advice,” says Deputy Religious Affairs Minister Datuk Ahmad Marzuk Shaary who has publicly apologised, thus confirming that the black Toyota Alphard with the numberplate reading P45 that was caught on camera breaking traffic rules in Kelantan, was his.

Assumingly responding to the countless social media comments asking him about the incident, the Deputy Minister went on Facebook to write an apology/thank you note for the individuals who had recorded and reprimanded the violation.

“As an imperfect being, I take responsibility for the criticism that was given and take it to improve myself and my staff,” wrote Ahmad Marzuk saying that his staffer was fully cooperating with the authorities.

It was reported that a 31-year-old official driver was behind the wheel of the black van during the incident.

He was said to be in a rush to pick up his boss from home in order to send him to the airport. But the identity of the van’s owner or the driver’s boss had never been officially confirmed.

Ahmad Marzuk hopes that his staff would learn from this lesson and improve if charges were to be brought on him.

The case was said to be investigated under Section 41(1) of the Road Transport Act 1987 (Act 333) for reckless and dangerous driving – which if a person is found guilty of, may be punishable by a prison sentence of no less than two years or a maximum of 10 years, as well as fines up to RM20,000.

Previously, the Deputy Minister had chimed in on the issue involving VIP treatment at the Putrajaya mosque and ask that everyone is provided equal treatment.