Malaysian HR Minister said that workers who refuse to take the Covid vaccine are an occupational hazard. 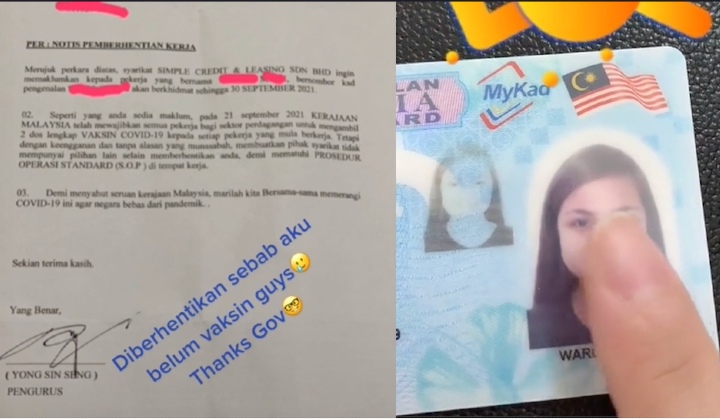 “I’m not an anti-vaxxer,” explained a local TikToker who went viral after claiming that she was laid off work for not being vaccinated.

Lia_Rose had posted up a letter that was supposedly sent by her employer in Kota Kinabalu, Sabah which reads that her employment would be terminated at the end of September.

“As you know, on 21 September 2021 the Malaysian Government had made it mandatory for workers in the trade sector to receive two full doses of the Covid-19 vaccine for employees who are returning to work. However, with your refusal and without providing a reasonable excuse, the company is left with no choice but to terminate you to abide by workplace standard operating procedures (SOP),” read the termination notice sent by a credit and leasing company.

Lia_Rose had explained in the captions that she had worked there for 10 years, and further “thanked” the government for her particular predicament.

A peek through the comments show that most people had agreed with the company’s action to terminate someone who refused to take the vaccine without appropriate cause and that ‘anti-vaxxers’ should not be allowed to be in public.

However, in a later posting, Lia_Rose insisted that she was not against taking the vaccine, but was instead scared of the adverse event following immunization or AEFI.

Honestly I think that every individual’s antibodies are different. Thankfully those who’ve been vaccinated didn’t receive adverse reactions like others. Congratulations. But different people face different situations… Me? The situation in my surroundings, almost everyone receives adverse reactions from the vaccine. Who wouldn’t be scared and worried? In this situation, (I) need support and encouragement if it’s mandatory to take the vaccine.

Her claims, of course, cannot be substantiated – as in, she provides no proof of anyone having adverse side-effects and it is highly unlikely that anyone experiences any unexpected side-effects other than common flu-like symptoms.

However, Lia_Rose later explained that she was working things out with her employers and that she would take the vaccine for the sake of her paycheck.

If the situation forces me to do so, involving work, I’ll get vaccinated. They gave me time to get the vaccine, time off and other things. We’re talking it over nicely.

Lia_Rose ended her online confession by encouraging others to get themselves immunized.

So to the friends who haven’t been vaccinated and still want to work, go and get vaccinated quickly without delay.

Legally speaking, employers are fully within their right to terminate the employment of those who refuse to be vaccinated without providing a valid reason for doing so.

Human Resource Minister Datuk Seri M. Saravanan previously stated that workers who refuse to take the vaccine can be deemed as an occupational hazard.

We don’t have any rules or acts that compel workers to be vaccinated, but we can use the Occupational Safety and Health Act to take action… We should not dispute the need to be vaccinated because the public is aware that we want to be free from Covid-19. So we need to do it together by getting vaccinated.

However, the move did receive pushback from organizations like the Malaysian Trades Union Congress (MTUC) who say that the government should implement proper policies to regulate the situation.

Since the government does not make vaccination a mandatory obligation, companies cannot make refusal to take vaccines a fair and justified reason to lay off employees. Do not let this matter be handled by employers and companies without guidelines from the government.

The MTUC further urged employers not to terminate their staff for refusal to take the Covid-19 vaccine.