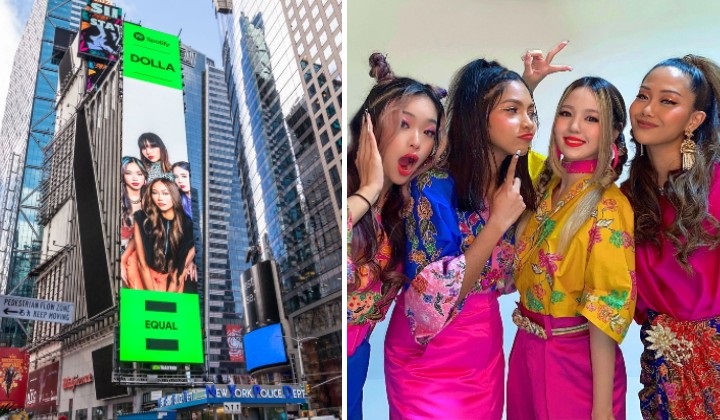 Malaysian and international superstar and songbird Yuna has been featured on it at least twice.

Just a few months ago, up and coming songstress Layla Sania graced it.

What is it we’re talking about? The massive billboards that light up New York City’s Times Square of course! And now it’s girl Malaysian girl group DOLLA’s turn to make their presence be known.

Sabrina Rusli of DOLLA posted on her Instagram thanking Spotify, along with their label Universal Music Malaysia, for making the “epic moment a reality”.

She was also quoted by Berita Harian saying, “We can’t express our feelings right now. It’s a great honour for a singing group like us who are still new and hope to continue meeting the expectations of the fans.”

EQUAL is a global programme by Spotify which aim to foster equity for women in music globally. It was launched in March 2021, in celebration of International Women’s Day.

There are 35 EQUAL local playlists spanning artists from over 50 countries.

The recent EQUAL playlist featuring DOLLA is under the current Singapore & Malaysia playlist which showcases 50 songs from female artists from both countries.

Congrats to the power quartet made of Sabronzo, Tabby, Angel, and Syasya!

In case you aren’t familiar with them, DOLLA was formed in 2019 and they can be seen conquering the local music industry with their bold style, and impressive singing and performing talent.