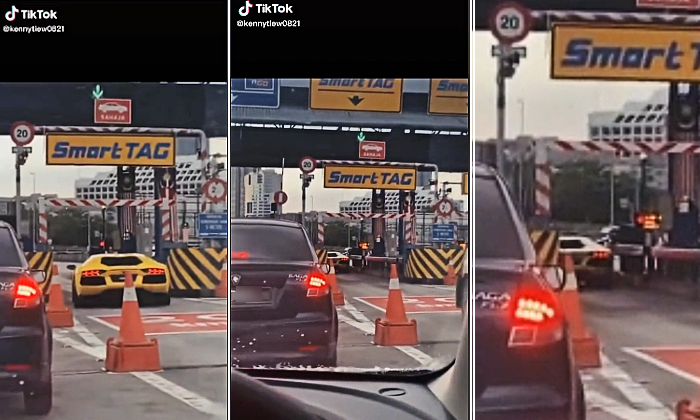 Netizens weren’t sure to laugh, cry or be impressed by the sneaky manoeuvre performed by the driver of a yellow Lamborghini that was allegedly caught slipping under a toll both on a local highway without paying the fee.

A video shared by Kenny@X-ONE on TikTok claimed to have captured the vehicle driving under the SmartTag lane toll gate while it was still down, and with the toll lights still flashing red.

No need to pay toll fees? 😳 ##like ##followme ##lamborghini ##shimalganu

A quick look online shows that commenters had found it amusing that a person who was driving a million ringgit sportscar would first, break the law and second, couldn’t afford to pay a toll which maybe had only cost around RM2.50.

Others were just upset over the fact that they probably couldn’t do the same stunt themselves.

Now according to the local automobile website, Zigwheels Malaysia, the on-the-road price for a brand new Lamborghini Aventador (you can kinda tell by the taillights) in 2021 is exactly RM2,274,194, and it says on Curosell that you can rent one for no less than RM7,000 a day.

Knowing this, you won’t find it surprising to see some comments that echo calls to “eat the rich”.

But there were also those who came in defence of the sportscar by saying that people were too quick to jump to conclusions.

Several commenters pointed out that it was possible that the vehicle had in fact paid the toll fee. Others also claimed that it was normal for “lowered” sportscars to pay toll fees without alerting the toll gate sensors.

However, Kenny@X-ONE later claimed that the toll booth display screen had shown that the yellow Lambo had “low balance” in its Touch n Go account when it drove under the gate.

Now what usually happens when you drive through a SmartTag lane and you see the words low balance flashing on the screen, it means that your TnG account does not have enough credit in it for the toll to deduct.

Normally, drivers are forced to either leave their car there at the toll booth and walk to the nearest ‘top-up’ counter to reload their account (creating an annoying traffic jam) or be forced to reverse their vehicles and drive to the nearest reload or cash lane (also creating annoying jams).

Kenny@X-ONE even provided netizens with footage of showing himself supposedly driving through and paying the toll using the SmartTag lane as a comparison for the more sceptical viewers.

Amazingly, it’s not really uncommon for the drivers of expensive and luxurious cars to be, well, a nuisance both on and off the roads.

Lambos are also notoriously known to be the vehicle of choice to perform some of the trickiest of tricks you might see in the movies.