The straw is made of rice and the longer it soaks, the more jelly in texture it becomes. 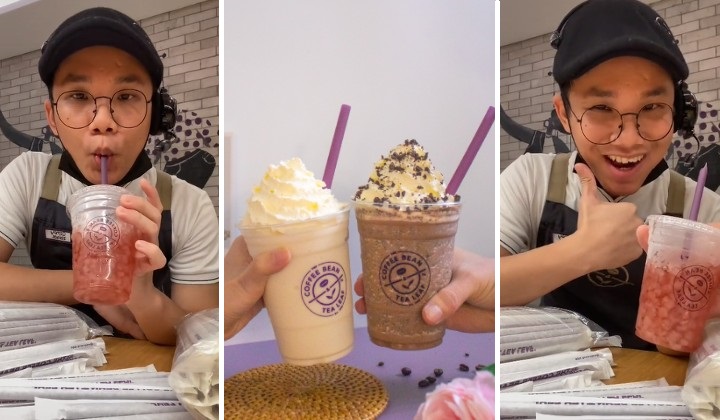 When Coffee Bean & Tea Leaf Malaysia (CBTL) announced a few months ago that they introduced a biodegradable, edible, and 100% turtle-friendly rice straw, the response to their post was received well with over 400 reactions.

However, when a barista who works at CBTL posts on their TikTok with a video to answer the question of whether these eco-friendly straws are edible (after all, it is made of rice), and then proceeds to eat one, the Internet goes wild with over 1 million views and 100 thousand reactions.

In the video, Azmey Zainal, who goes by the username whynotjemah_ on the popular video-sharing app, can be seen with a packaged stack of straws.

To settle the argument, he decides to show us himself and places the famously purple CBTL straws into an iced beverage, takes a sip and proclaims, “so far my drink is good” then proceeds to bite and chew the straw.

The straw may be a bit tough to chew. So, Azmey suggests letting the straw soak in the drink for a bit until it becomes a bit like jelly.

Edible straws are still better than paper and metal ones

Paper straws tend to get soggy fast while metal ones can be unhygienic.

And while we could just do without straws in general, they are necessary to have when it comes to certain drinks like boba tea, or for people who have sensitive teeth. Those with a mustache can also benefit from straws and single straw use is also more hygienic, especially for canned drinks.

If you’re not heading to a CBTL any time soon and wondering how to get your lips on edible straws, fret not be cause pasta straws are now also a thing.

A simple search will show a lot of retail platforms selling them. And the upside? You could probably cook your straws afterwards for an experimental pasta dish.

Alternatively there are also other eco-friendly straw options made from wheat, sugarcane, cornstarch, grass and bamboo.