The post office was apparently an official agent for the Bangladesh embassy. 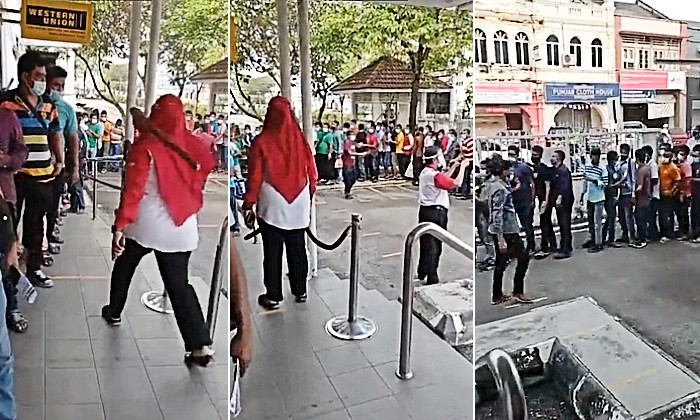 It’s been barely a week since the Klang Valley transitioned into the next phase of the National Covid-19 Recovery Plan (NPR) and so far we’ve already witnessed some disturbing things in regards to people allegedly taking health SOPs for granted.

More recently though, a viral video capturing the crowded scenes at a local post office in Klang left netizens wondering what’s in store for them next.

At just around 15-seconds long, the clip showed Pos Malaysia employees furiously trying to control a long line of people believed to be foreign workers who were queued up in front of the post office, supposedly to renew their passports.

The clip saw one female employee, who was wielding a large wooden stick, angrily telling the people who were standing in line to physical distance themselves from one another and abide by SOPs or go home.

“If you’re like this then I won’t let you enter! Go home!” screamed the Kakak, banging her club against the building while instructing the crowd to line up properly, or disperse.

Her male coworker was also observed trying to control the situation by asking people to spread themselves out even further.

People were seen standing shoulder-to-shoulder and shoving each other around in order to comply with the instructions. A number of individuals were also seen stepping out of line to help manage the situation by getting others to maintain a minimum of one-meter separation from each other.

The footage as you’d imagine left some netizens rather speechless, while others try to point fingers to find blame.

Some also came to the defence of both the Pos Malaysia employees and the foreign workers who were there at the scene.

So what happened after?

According to South Klang District Police Chief Shamsul Amar Ramli, about 130 people had attended the post office that day to collect passports.

The Chief explained that the Pos Malaysia branch in Klang was appointed as an official agent of the Bangladesh embassy to attend to their citizen’s renewed passports.

Chief Shamsul explained that his officers were also present at the scene and were able to bring the situation under control and said that police would be stationed there from now onwards to prevent it from happening again.

Read More: [Watch] Another Viral SOP Violation As People Queue Close Enough To Hug Each Other