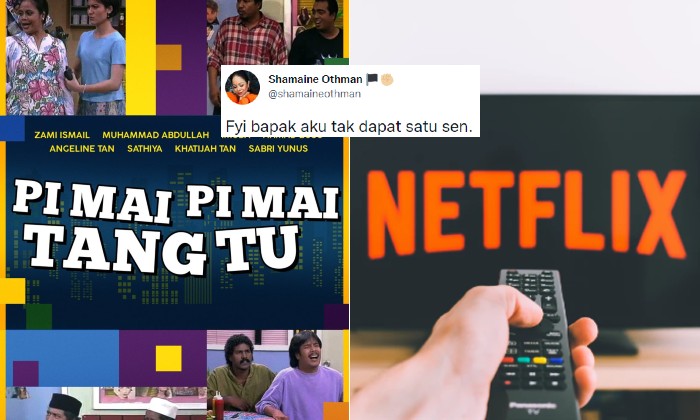 Pi Mai Pi Mai Tang Tu, one of Malaysia’s most iconic 90s’ sitcoms, will be airing on Netflix this October.

However, it appears that the makers of the popular show won’t be reaping in any of the profits associated with its release on the video streaming platform.

In a posting shared on social media, local film producer Shamaine Othman revealed that the original talents credited for the show’s success allegedly won’t be getting a single cent in paid royalties from the Netflix deal.

Shamaine is the daughter of veteran filmmaker Othman Hafsham, who is the director and producer of Pi Mai Pi Mai Tang Tu, which first aired on TV3 in 1985 till the early 2000s.

The show even had its own musical theatre which was performed on stage in 2006. Reruns of the show are also currently available for free viewing on YouTube.

Shamaine revealed that her father, actors and actressess as well as the show’s entire production team won’t be getting anything because the rights for the program belonged entirely to TV3.

The celebrity claims that this was standard practice in Malaysia’s entertainment scene, and that many in the business had tried and failed to change this injustice.

She also claims that almost every talent in Malaysia’s film industry were not being paid in royalties despite their works being featured on multiple online platforms.

Talents being unfairly compensated for their works seems to be a global problem in the entertainment business as shown by Disney’s latest hiccup with Black Widow actress Scarlett Johansson.

As it goes in Hollywood, talents are entitled to recieve payments in the form of royalties from the syndication, redistribution or re-releases of their works.

However this would depend on their initial contracts signed during production, and most artists generally miss out on residual profits from their hard work beyond what they were originally paid for.

ok didn’t expect this tweet to get a lot of attention. whilst it’s great that the work of my father, the actors , and entire production team of PMPMTT will get another life on Netflix, it’s a shame that they will not receive any royalties or residuals from this. https://t.co/uJpnYjExqO

nothing much has changed.

Also, almost all of the actors and production team of all the Malaysian films and series available on these platforms get ZERO royalties.