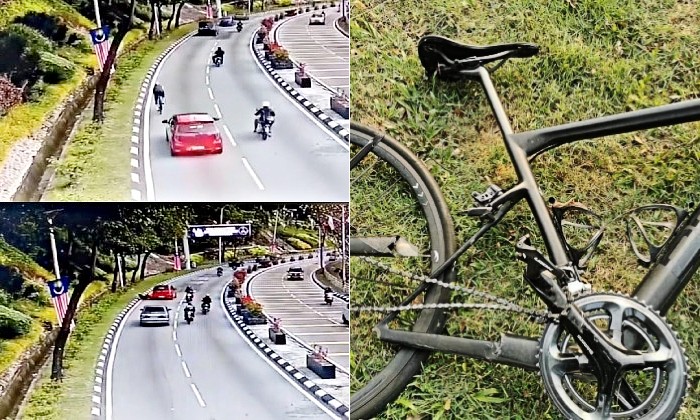 Malaysia’s social media investigators quickly went to work on identifying the driver of a red Perodua Axia that had allegedly run over a cyclist on Jalan Kinabalu in Kuala Lumpur on Wednesday (8 September) morning.

It was understood that a public call was sent out to help find the culprit behind the incident after a traffic cam footage capturing the hit-and-run managed its way online.

Netizens were supposedly able to track down the vehicle’s owner through the car’s license plates.

In the video, the cyclist was seen riding on the far left side of the road before being hit by the vehicle that came from behind it.

While many had accused the driver of intentionally causing the collision, others say that the bicycle shouldn’t have been on the road in the first place.

Fun fact though, according to Malaysia’s traffic laws, cyclists are indeed allowed to be on all types of public roads, except for highways and expressways, depending on the circumstances.

Read More: It’s Not Illegal For Bicyclists To Use Highways But These Are The Laws You Can Use To Report Dangerous Cycling

Netizens also later dug up that the owner of the red Axia was not the one who was behind the wheels during the incident.

A police report shared online claims that the original owner of the vehicle had loaned the car to a friend.

Reportedly, both the cyclist and the driver later came to provide statements to the Kuala Lumpur Traffic Police.

Cops say that the cyclist, a 33-year-old man who worked for KL City Hall (DBKL), had suffered from minor injuries. His bike though, as seen in pictures, had definitely seen better days.

Meanwhile, the driver behind the red Axia was identified as a 22-year-old individual who was released from custody after providing statements.

Police explained that the car had continued on its journey after having hit the bicycle.

The car was also confiscated to aid the investigation.

The case was being investigated under Rule 10 of the Road Traffic Rules 1959 for the offence of neglecting to properly control a vehicle or being asleep behind the wheel.