The utility hole was missing its cover. 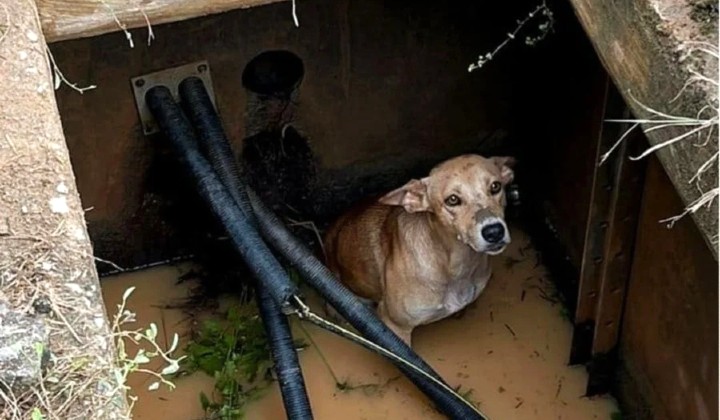 A stray dog was rescued by Telekom technicians from a flooded utility hole in Jerantut on 7 September, reported NST.

According to NST, technician Mohd Saifullah Abdul Moin and 4 other colleagues were on the way to Felda Jengka 9 from Jerantut to look for damaged telephone cables.

They spotted a utility hole with a missing cover, which is suspected was stolen.

When the five technicians went to investigate the utility hole, they were shocked to find an exhausted dog sitting in murky yellow flood water.

At first, they tried to wedge a plank of wood to allow the dog to clamber out on its own, but it wasn’t able to.

I was feeling very sorry to see a stray dog trapped in the utility hole with his head looking up hoping for help.

Finally, his colleague Muhammad Zahid Mohd Nasir jumped down into the partially-submerged hole to rescue the dog. He used a gunny sack from the van to wrap around the dog’s neck to carry it.

However, it took a few attempts because the dog was quite heavy. Eventually, he managed to lift the dog out of the hole.

The team fed the dog some bread, and after resting on dry ground, the dog got up and trotted away.

Zahid joked that it was the first time he ever had to rescue a dog and considered it one of the challenges in his career.