Amin the dog died in 2009 but his memory lives on. 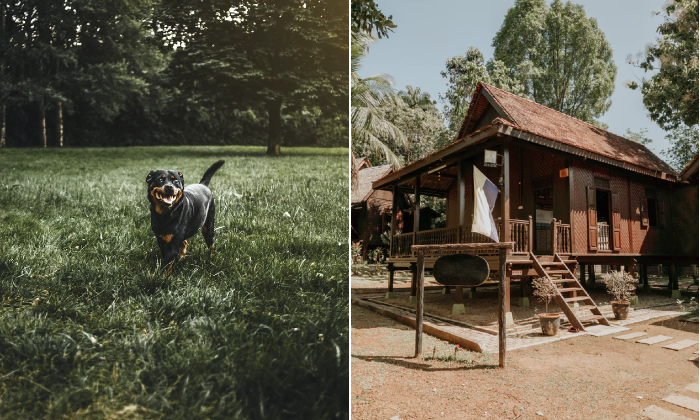 Netizens felt all warm and fuzzy inside by the tale of Amin, the loyal farm dog who sadly died in 2009 but is still fondly remembered by his Malay family today.

A posting shared by Fizwann Abdul Halim on the MALAYSIA 🇲🇾 NEGARA KU Facebook page narrates the lovely story of how his family supposedly came to welcome a big-black rottweiler into their home and how much the canine companion meant to them.

In his writing, Fizwann tells of how his late father, Abdul Halim Marwan, had started a goat and cattle farm in Selangor after retiring from the police force in 1997.

Working the land with the help of his wife, sons and other members of the family, the farm soon grew in size and bore fruit for the household.

But, in 1999, the farm was unfortunately robbed by criminals who not only stole all of their farm animals but threatened the family’s lives.

“On the night of the robbery, my father and siblings were beaten up by the robbers, while my mother was tied up and kicked by them. I was doing my practical in medicine in Penang at the time.” wrote Fizwann, and shared that the criminals still remained at large.

The event however did not deter the family and his father got straight to working on the farm again.

But, life on the farm would soon take another turn when Fizwann’s father took a trip to Banting in order to meet with an old pal in 2002, who just so happened to be a local dog breeder.

Fizwann said that his father immediately connected with a newborn purebred rottweiler pup that his breeder friend had and straight away asked if it was for sale.

My father went through all the process and documentation to apply for a licence, and finally, he managed to obtain a license to keep the rottweiler for agricultural and farming purposes. The dog was given the name Amin and my father has kept Amin since he was just two months old.

Fizwann’s father personally trained Amin to be their trusty farmhand – where he helped manage and protect his home.

“Amin was kind, smart, ingenious and full of energy. It’s not easy to farm a large number of goats and cattle. Amin helped my father, mother, siblings and other farmworkers to keep watch over the farm animals from wild boars, monitor lizards, snakes like pythons and cobras, and thieves,” shared Fizwann, remembering the countless times Amin had foiled criminals from robbing them and scared dangerous animals away from the farm.

Amin was also apparently smart enough to understand that his family were Muslims.

Fizwann explained that the canine would always wait for his owners to say “Bismillah” before he ate and would never lick any member of the family or the other farmworkers.

“Amin would just sniff their feet, to recognise their scent maybe?” wrote Fizwann, sharing how the dog would also always be excited when welcoming customers to the farm but never did anything that bothered or scared them away.

Amin would jump around with joy, help open the gates and bark to call my father before running off to the stables as if to say that the goats and cattle are ready for sale.

Fizwann told of the deep bond that his father and Amin shared and how he and his siblings felt a bit jealous by the affection the man had for his canine companion.

He also noted how there were people who had made offers to purchase the purebred dog, but his father declined every single one of em’.

Fizwann further shared how he once caught his father speaking with Amin, telling the dog to take care of his family and the farm when he was no longer around.

The father also told Fizwann and his siblings to take good care of Amin as if he was another “brother” in the family.

Fizwann’s father Abdul Halim, passed away on a June morning in 2009.

On the day of his father’s death, Fizwann remembers how distraught Amin was and how he stayed by his owner’s side to his grave.

Amin never left the stable unless he’s told. But suddenly, Amin was in front of the house barking like he was calling out to my father. As we prepared my fathers remains (for burial), Amin sat and stayed under the house from start to finish. When my father was carried to the graveyard, Amin stayed back and followed us from behind, walking slowly and waited at a corner of the graveyard. Amin can even be heard whimpering and howling gently, but as if he understood what was happening, kept his distance from other people.

That evening, Fizwann said that Amin refused to eat and took one of his father’s shirts to the stable – keeping it close as he slept.

The next day, Fizwann and the family were heartbroken to find that Amin was also no longer with them – having died with his owner’s clothes still in his embrace.

“God, at that moment my heart was torn, my tears wouldn’t stop flowing and I felt numb. It’s true what people say if we take care of an animal all its life, when it dies, it’s like losing a family member,” wrote Fizwann, dedicating his post to his late father and their beloved dog.

Read the full story of Amin the dog and the family that remembers him, (HERE)