The front half is a frame with metal guards for the student and the back half has a handlebar so the teacher can guide the student. 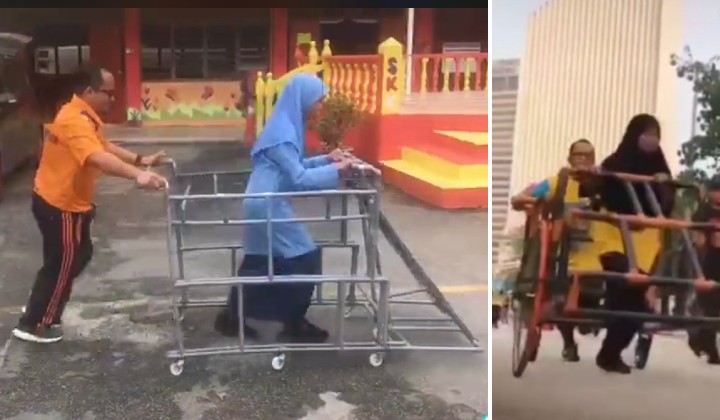 Cikgu Azam is a Special Ed teacher who works with blind and visually impaired students.

Recently, he gained recognition for building an innovative running aid for his students so they can run freely without fear of falling down.

A heartwarming video of one of his students joining a group marathon with his running aid was shared onto his TikTok account, which garnered almost 300,000 views and was widely shared on other platforms.

This is my inovation project.Special to assist my blind student for their running.. 😁😁😁 Berjaya habiskan 5km last year.Bangga cikgu

The running aide works like a walker on wheels crossed with a shopping trolley.

The front half has a frame that allows the students to hold on with metal guards around the legs to prevent the user from running into things. The back half has a handlebar, much like a shopping trolley, allowing Cikgu Azam to steer the running aid in the right direction while his student runs to their heart’s content.

According to Cikgu Azam, the project was made for one of his students, Alysa, who is visually imparied.

The early prototype was bulkier with less legroom, but Cikgu Azam said that his student Alysa was overjoyed as it was her first time ever running without needing to hold on to his shirt or be tied with a rope to not get separated.