AirAsia was forced to reimburse over 2 million customers and let go more than 10% of their staff because of the pandemic. 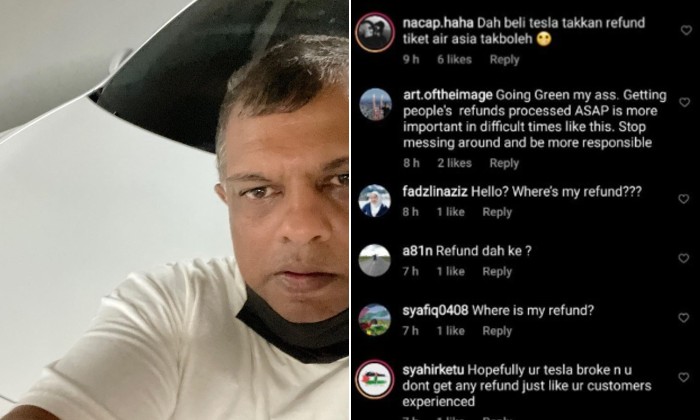 AirAsia’s Tan Sri Tony Fernandes probably didn’t get the response he was hoping for when he showed off the brand new Tesla Model Y that he apparently got himself for Merdeka.

Sharing a few selfies of his ride on Instagram, the CEO wrote some things about going green, moving away from petrol-powered vehicles and his love for the electric car.

Tony’s energetic flex, however, received some pushback from netizens who accused the billionaire of flaunting his wealth.

A look through the comment section reveals a number of commenters asking Tony about the status of customer refunds and staff pay.

Many gave rather cynical replies on how Tony was allegedly enjoying the fruits of his apparent success while some of AirAsia’s customers have yet to be refunded for their cancelled flights due to the Covid-19 pandemic.

Some were also critical about the livelihoods of AirAsia employees whose pay have either allagedly been cut or paid out late.

Since Covid-19 travel restrictions were put in place in March 2020, most airlines including AirAsia have been grounded – having not flown in over a year.

Tony had previously acknowledged his company’s financial troubles because of the pandemic and how it was going through a corporate restructuring in order to survive.

The airline promised to pay back its customers in cash, or preferably, AirAsia credit.

AirAsia reportedly paid off 1.5 million claims between January 2020 and April 2021, with 2.9 million people accepting a credit refund in the form of a credit shell.

However, as of April, there are apparently some 450,000 people who are still waiting on their reimbursement.

Read More: Tony Fernandes Promises That AirAsia Refunds Will Be Done, But Gradually

Over 2,400 employees were terminated since 2020 which included job positions such as pilots and cabin crew.

Hundreds of other employees were also forced to undergo retraining and were relocated to other job positions within the company.

Tony himself had promised that in the future, he would rehire the people the company was forced to let go.