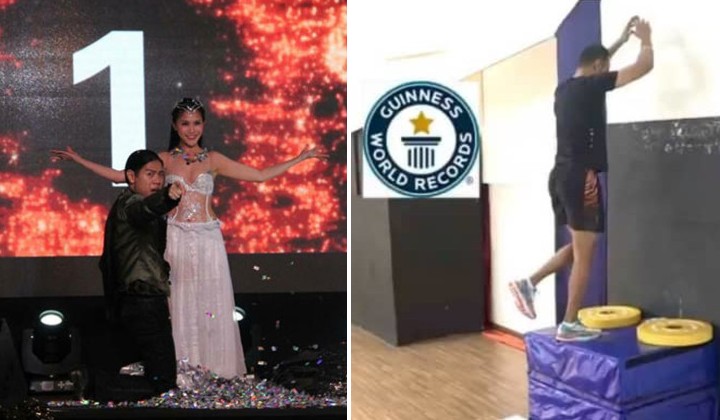 Paralympian Muhammad Ziyad Zolkefli would have smashed the record in Shot Put for hurling a solid iron ball at a distance of 17.94m, an achievement far greater than that by able-bodied athletes too.

Unfortunately, he was disqualified in what many Malaysians are calling unjust.

Ziyad’s solid performance and display of true grit and resilience however is something quite prominent in Malaysians in our quest for excellence and breaking records.

Here are a few bizarre, sporty and truly Malaysian world records we have made and broken before, and boy are they something to talk about.

Most costume change illusions in one minute

The total number of costume changes in one minute that made the Guinness World Records was 24 and was achieved by Avery Chin and Sylvia Lim (aka Avery & Sylvia) in George Town, Penang on 2 September 2017.

The attempt was in conjunction with Malaysia’s 60th Merdeka celebrations. Watch the mind-blowin’ feat here:

Most people in a mobile phone game relay

On 11 June 2011, Nokia (Malaysia) gathered 2,030 people in Kuala Lumpur to play ‘Angry Birds’ continuously with each participant clearing or failing one level of the game, for a total of 10 hours.

Why? It was a marketing ploy to strengthen the association between the highly popular game at the time and their new smartphones.

While the first two mentioned records are unique achievements, there comes a time when a Malaysian comes along to break an existing one.

The previous record-holder was an American football player.

As expected in sport, Malaysia has to be somewhere when it comes to breaking records in badminton.

In truly Malaysian fashion, food and restaurant review website HungryGoWhere launched in the Malaysia market officially on 24 August 2013 by lining up 11,315 nasi lemak parcels or wraps at the Sunway Pyramid ice-skating rink.

Each nasi lemak packet had a quarter cup of rice, 1 slice of cucumber, half a boiled egg, a soup spoon of sambal belacan and was wrapped in banana leaves.

If you’re wondering what happened to the nasi lemak after, 7,000 of the packets were distributed to various charities and people at the mall.