They have been observed to throw things at males harassing them. 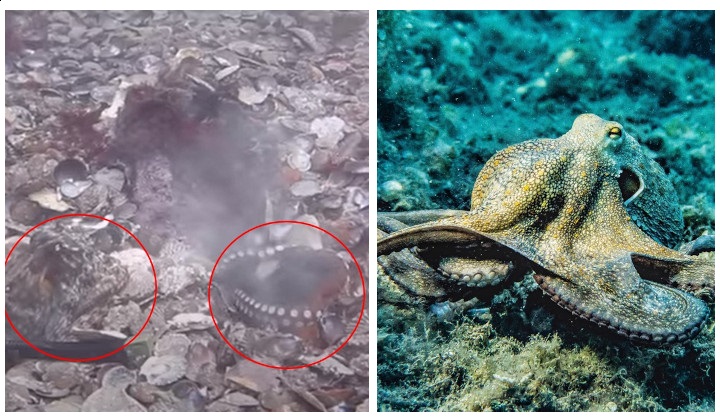 The animal kingdom is as perplexing as it is fascinating. One thing we have in common is zero tolerance for harassment.

Analysis of recent footage of octopuses off the coast of Australia “throwing” shells and fine sand called silt suggest that the females often throw things at the males that are harassing them.

The “throwing” behaviour was first observed in 2015 by Professor Peter Godfrey-Smith at the University of Sydney when he and his colleagues filmed several common ‘Sydney octopuses’ (Octopus tetricus) interacting at a site in Jervis Bay dubbed “Octopolis”.

“Throwing” is a term the team refers to behaviour where the octopuses hold silt, algae or objects such as shells under their bodies in their tentacles, then angle their siphons and shoot a jet of water at the projectiles, propelling them up to several body lengths.

Although the action was known to be used for discarding the remains of meals or for excavating dens, more footage has been revealed with many instances where they have hit others by throwing objects deliberately.

The retaliation way down under

In a report by New Scientist, Peter recalls back in 2016 where one female octopus threw silt ten times at a male from a nearby den attempting to mate with her.

She hit him on five occasions, which Peter says was one instance that convinced him it was intentional.

On four of the ten attempts, the male tried ducking to no avail. On two cases, he anticipated the throws and dodged before the silt could hit him.

The throws used during den-building were always shot between the front two tentacles.

When throwing at others, however, the octopuses sometimes angled the throw between the first and second tentacles on the left or right. Peter suggests this action is a kind of targeting.

It’s pretty rare. Especially rare is the throwing of objects at other members of the same population.

– Peter Godfrey-Smith via The New Scientist

While the throwing appears to be used as a form of attack, the team hasn’t seen any of the targets fighting back.

However, what they did observe in one case was that after intense social interactions where the male’s advances were rejected, the male threw a shell in a random direction and change coloured. This suggests he may have been venting his frustration.

All Nature Trails Reopen In Selangor, Groups Of 7 Allowed