The video was taken down following negative responses. 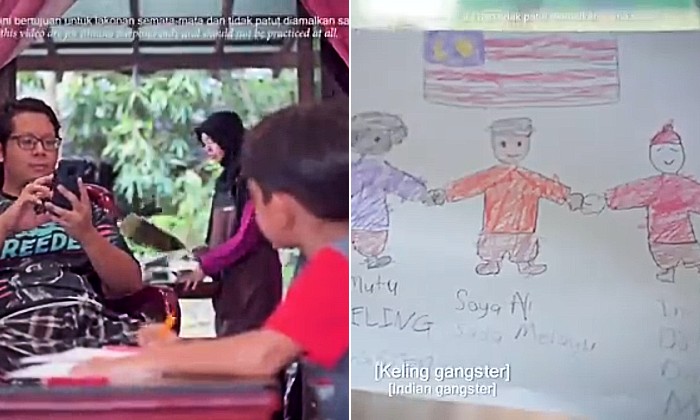 Titled, “Mak, Dah Siap!” or “Mom, It’s Done!”, the ad was published on 22 August then later deleted following responses from the public who apparently deemed the video to be racist, perpetuating stereotypes and seditious in nature.

The minute-long video featured a Malay family spending some quality time at home – with a father browsing the web, a mother working on some chores, and a son who’s drawing with crayons.

While scrolling through social media postings on his phone, the father went on to describe Indians and Chinese with derogatory terms like “India Keling”, “Cina Bukit”, gangsters, and drunks before being scolded by his wife who said that Islam does not teach its followers to say such things.

The ad later switched to the son showing the mother his artwork which displayed a drawing of three people under a Malaysian flag with the description;

The video finishes with the mother’s shocked reaction at her son’s drawing and a narration by the boy which said “I was not born racist, but I was taught”.

Netizens who managed to save a copy of the ad before it was removed then began pondering the video’s intended message.

Some agreed that the video was offensive and promoted racial stereotypes.

Inappropriate & gross generalization. Glib and simplistic. Self victimization syndrome. There are better ways to convey the same message.

I humbly think it was wrong to use the derogatory terms. You can still get a strong message out without resorting to the very terms people find extremely offensive.

First of all, it’s a derogatory term; irregardless of the underlying message it shouldn’t be used for a National Day ad

Secondly, there are multiple ways to convey a message combating racism and this ad isn’t it.

As a Malaysian Indian, I strongly condemn this.

Others argued that the ad hits very close to the heart at calling out what’s happening in Malaysia today.

It may be harsh but the message is accurate.

Racism is taught. No one is born racist. https://t.co/I03evtysJb

The message is very clear and straight forward. I do not know why many seeing it thru same racism lens. They fail to see to crystal clear message.

Those derogatory terms are real harsh but necessary to reflect the truth. One day, a united Malaysia insyaAllah

Despite varying opinions on the video, IKRAM later wrote an open apology explaining that the ad was meant to reflect real-world situations that exist within Malaysian society and instil patriotism.

The main message conveyed in the video is to show the current reality that exists within some parts of Malaysian society that tend to label other races with negative acts or behaviors.