Videos of 54-year-old Fatimah Mat Kasar have been making rounds on social media for her ability to converse in Tamil and Cantonese. 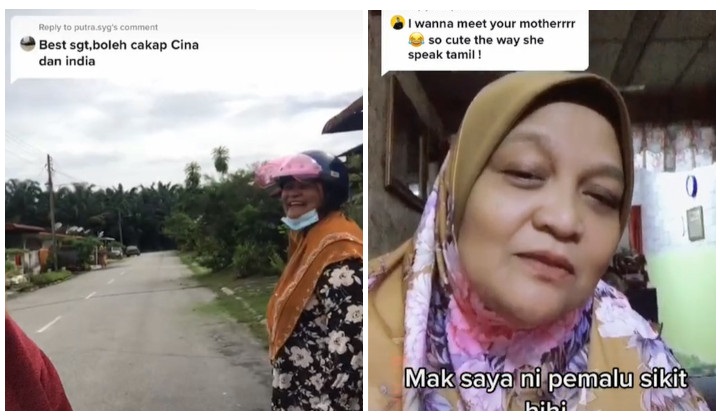 Just in time for Merdeka comes a story of a Malay woman in Ipoh who went viral in a video on her daughter’s TikTok for her impressive command of the Tamil and Cantonese language.

The video that first garnered attention has since received over 1 million views and featured 54-year-old Fatimah Mat Kasar speaking to her neighbour in Tamil in a simple, playful conversation to tell her that she was heading to Batu Gajah.

Many praised Fatimah for her fluency and requested more videos of her speaking the language.

In another video previously posted by her daughter, Fatimah was seen speaking to her neighbour in Cantonese.

Being the good sport Fatimah is, she even recorded a special video in Bahasa Melayu and Tamil for her daughter’s TikTok followers and thanked everyone who liked and shared her videos.

The Muhibbah upbringing that started it all

In a chat with the Malay Mail,  Fatimah said she grew up in an Indian neighbourhood in Buntong, Perak and had many Indian friends and neighbours.

As one of the few Malays in the area, she learned Tamil and even had neighbours correcting her if she mispronounced a word.

Fatimah also revealed she watches a lot of Tamil movies and that has helped to improve her command of the language to the point she doesn’t need subtitles when watching.

Her knowledge of the Chinese language on the other hand was taught by an old friend who needed help to master the Malay language, and in return, Fatimah was taught Cantonese.

Fatimah, who owns a burger stall now, used to work as a salesgirl in her late 20s and had to approach many customers and that also helped improve her language skills.

However, my Cantonese is still not as fluent compared to my Tamil.

The gift of language during difficult times

Fatimah’s proficiency in multiple languages has had her help many to fill up forms in government offices which are usually in Malay.

Just recently, she helped an aunty to fill up a form before her first dose of the vaccine.

Other times she’s come across older people having trouble writing in Malay and would initiate to help them while speaking in Tamil, which would often shock them at first.

Make new friends and learn from each other

Fatimah is also encouraging her children to follow in her footsteps to pick up both Tamil and Cantonese as she says it can help them make more friends and learn new knowledge from the people around them.