She apparently gets turned on by men de-masking in-front of her in public. 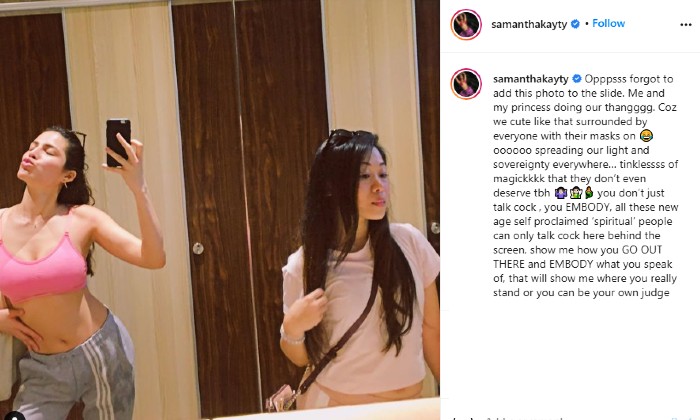 “I will never wear that f**ing diaper on my face,” confessed former Miss Universe Malaysia 2017, Samantha Katie James, who sparked an online controversy surrounding her supposed free and sovereign rights not to wear a face mask in public.

The beauty pageant winner who was previously slammed for her racist comments concerning the Black Lives Matter movement is now allegedly trying to get people to follow in her so-called magical footsteps and not worry about health guidelines.

Posting a maskless toilet selfie of herself with a friend on Instagram, Samantha claims that she would never wear a face mask unless it was to go “undercover” around people who actually cared about SOPs.

Me and my princess doing our thing because we’re cute like that surrounded by everyone with their masks on, spreading our light and sovereignty everywhere. I will never wear that f**king diaper on my face unless of course I use it to be undercover around annoying people.

The influencer also claimed that her actions managed to convince others to take off their masks and told people how she was aroused by a man who took off his mask in front of her after seeing what she did.

I saw a guy walk past me pull his mask off and crunch it in his hand! That’s my man. Love you whoever you were, that was hot, turn on.

Samantha’s weird flex of course had its supporters but there were also those who called out the disgraced beauty queen’s ignorance.